It was recently once again my pleasure to present a large scale participation wargame to my local gaming club TableTopNorth in Belfast.  The scenario was a continuation of an ongoing campaign between the rebelling human forces of the RPK republic (near future Arabs) and their evil galactic overlords the Naga (snake like aliens).  This game represented the climax of the campaign.  Following a disastrous defeat for the humans as they tried to force their way to the capital Kimtown down the main highway in the last Big Game they rethought their tactics and advanced through the mountains.  This game was set a few weeks after the arrival of the human forces in the capital.  Fighting has stalled and the opposing forces have built defences and hunkered down in adjacent city blocks.  The game would be won by whichever side scored the most victory points.  Uncontested control of each of the hab blocks in each sector scored one victory point at the end of each turn. 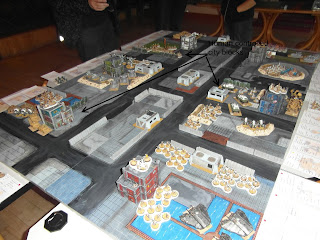 In Laserstorm cover is key.  Any unit directly behind a wall or in a building gets a cover save of 5+ in addition to the normal save roll of the unit.  Normal saves are adjusted by the power of attacking weapon whilst cover saves are not.  Before the game I emphasised how vital staying in cover was but as you can see a lot of units are out in the open as deployment finished.  This led to absolute chaos in the first turn of firing with casualties of around 30% on both sides at the end of the first turn!  Anti tank guns have deployed into the hab blocks at opposite ends of the board.  The alien guns took a casualty and failed a morale test causing them to flee the building they were in.  Once in the open they became very vulnerable to all incoming fire.  This left the aliens without vital anti tank weaponry.  Their human counterparts in contrast never broke a sweat staying resolutely in place for most of the game. 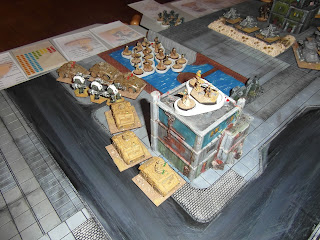 There are actually three guns in this building, one on each floor.  Their nerves of steel were to prove vital.

In the northern human city block with the tanks a much more cautious game was played making full use of cover before advancing.  Unsurprisingly the two central city blocks with enemies on three sides find themselves under a lot of pressure and take heavy casualties.  One alien Raven light vehicle transport with a stand of Vampirra power armour makes a brave dash towards the centre of the battlefield but it is really too little to have much effect.  The Ikwen militia subjugated into military service for the Naga have an outstanding game shooting down multiple enemies.  Even their underpowered solar RPG's prove useful destroying the large human mechs in the central city block.  Human Patrol Carriers make a brave dash to contest control of the northern hab dome on the alien side of the table.  We complete two turns before lunch.  Casualties have been extremely high on both sides with the aliens coming off worst.  The humans are ahead by a couple of victory points. 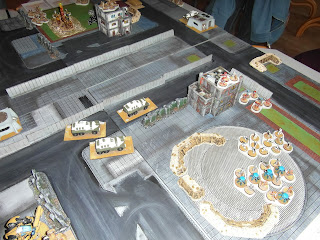 A heroic charge by human Patrol Carriers towards a hab block makes it contested and loses a victory point for the aliens.

Everyone has understood Laserstorm rules very quickly despite some of the players not regularly playing wargames. Combined with the high turn out of players this means the game is proceeding at a very fast pace.  I fear the game will not last the day.  I have a quick meeting with the team captains and we agree that an equal points value of troops can arrive as reinforcements for both sides on the narrow table edges.  We roll randomly for sides and the aliens come on in the south with the humans in the north.  We also tidy up some depleted units during the lunch break amalgamating and reinforcing some units.

After lunch the aliens make a well considered push with their recycled reinforcement units arriving in the south.  They pour fire into the hab block containing the human anti tank guns but a rotten run of luck means the fire is ineffective.  Only at this juncture does the commander of the alien SKA anti infantry field guns decide to redirect their fire onto the human anti tank guns and they are wiped out almost immediately.  Things are looking up for the aliens.  They are starting to get a secure base in the south.  Titan APC's nip around the corner of a hab block to get an unobstructed shot on a unit of RPK infantry.  Without cover saves the infantry is eliminated in a single round of fire.  On the other hand the aliens remain behind in victory points and have practically nothing left in the north to stop the human reinforcements rolling up them up. 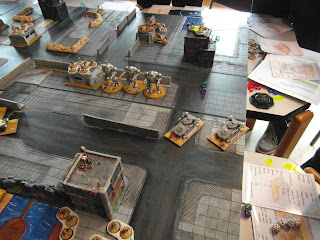 Alien reinforcements of mechs and APC's make an impact.

This proves to be the case.  The alien positions in the north crumble.  Alien anti tank gun reinforcements are brought into play with some success taking out two human tanks.  Relief is only temporary, the human reinforcements prove unstoppable in their advance down the table.  The picture below was taken towards game end as you can see casualties on both sides have been huge.  Four city blocks are firmly under human control and the aliens do not have the troops left to mount any sort of counter attack.  Their commander decides to concede at the end of turn seven with the score at 21/11 in favour of the humans.  I don't feel too bad for the aliens as they had a crushing victory in the last game.

Laserstorm rules worked superbly well without amendment besides allowing a unit activation per side per player.  This is despite the game being played in 15mm rather than 6mm as intended by the author.  I would say there are tiers to Laserstorm rules and we played on the lowest level.  The game moved at by far the fastest pace of any system I have used allowing an unprecedented seven turns of play and we finished an hour ahead of schedule.  I now realise that the speed of play combined with the generous movement rates mean much more detailed scenarios can be played.  Vehicles struggled in the urban environment as perhaps they should.  It was definitely terrain for infantry, battlesuits and mechs.  I should have included more of these in the army lists. 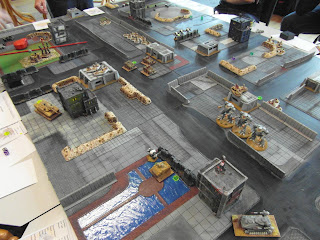 A couple of lone vehicles hold on in the south for the humans as their reinforcements sweep down the table.

The game was set up with enemies in adjacent blocks.  On reflection it would probably have been better to put more room between the opposing forces.  That being said some players did remark that they enjoyed the difficulties of having enemies on more than one side.  The game was almost the victim of it's own success with a much higher turn out of players than in previous years.  If I had known there would have been this many players I would have included more figures.  One of the joys of running an event game for me is to see non wargamers quickly understand the rules and explain them to other players.  This definitely happened during this game.  I would also think Laserstorm rules would be well suited to running a smaller demonstration game at a convention.