Dominion Wastelands - a USE ME test game

The flock on my Dominion Wastelands terrain set had barely finished drying when I played my first game. :)

Looking at the USE ME unit cards I had already made, I decided to throw in a few changes before the playtest.  In USE ME, Elan is a combined measure of the characters' morale, training, and experience. I had instinctively given the elite Expeditionary power armored troops the highest Elan stat (6). Thinking about my storyline, this just didn't fit. These troops have been in space, and had been training to fight a different enemy. Combining that background with the idea that Earth's terrain has been substantially changed, even the most elite Expeditionary troops should be at a disadvantaged.  So I lowered their Elan to 4 for this first game. 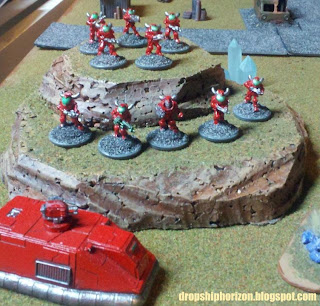 I also gave them an APC - a light vehicle with a 12" move and a vehicle automatic weapon.  Assuming the driver wasn't a member of the Elite cadre, I lowered its Elan to 3.

The Dominion troops received a slight bump to match the offset. I gave the standard troopers Elan 5 for this first game, and the larger battlesuit the highest Elan rating at 6.  A force of six troopers and one Battlesuit would be the Dominion forces in this battle. I figured this would represent a basic patrol force - locating deposits of the precious blue crystals and identifying any enclaves of human resistance.

Even with the modified stats, this didn't look very balanced.  I simply removed five of the Expeditionary troops and set up the game itself.  I kept the table mostly the same from my "work in progress" photos, simply removing the Armies Army troops from the settlement.  The Dominion forces deployed on either side of the lower-right hill, while the Expeditionary forces would enter on the gravel road (chosen by a coin toss). 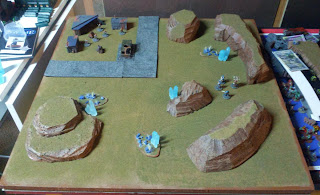 With their higher Elan ratings, the Dominion had the first chance to act. I simply advanced them toward the settlement, using the crystals as cover.  The Expeditionary APC entered from the left.  It moved into the settlement, deploying its passengers into the cover of the storage shack. The APC took a pot shot at the Dominion battlesuit, but only managed to kick up some loose gravel.

The Dominion forces acted quickly. While the troopers advanced from both the lower and right-hand sides of the board, the battlesuit fired upon the APC. Its armor proved too strong for the battlesuit. Even though it was partially covered by a wrecked armored vehicle, concentrated fire from the Expeditionary troopers (including their heavy weapon) managed to bring down the Battlesuit.  Meanwhile, the APC raced across the road to divide the Dominion troopers. 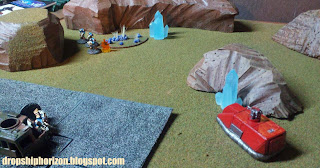 The delay was successful - only one of the trooper units managed to get within assault distance of the Expeditionary troopers. Despite their lack of experience, the Expeditionary force outnumbered and outgunnned the Dominion troopers, and had the advantage of both power armor and a defensive position.  All three aliens advancing from the lower edge were winged or struck.

During the next round, two of the Expeditionary troops broke cover to engage the second Dominion unit. They coordinated with their APC and set up a deadly crossfire. All three aliens were killed, with only a single human being winged.

By now the Dominion had completely failed in its mission. They attempted to close in and use their superior close combat abilities, but still couldn't do significant damage the Expeditionary power armor. The two flanking Expeditionary troopers returned to the melee, but the fight was already over. 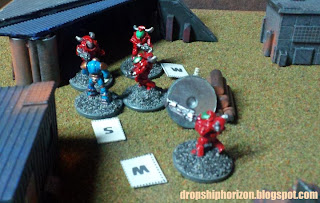 The game was far more lopsided than I predicted - the USE ME rules are very robust and playable. The downside?  They realistically favor an entrenched defender over an equivalent attacker!  But it gave me a chance to see how I want to run these characters as I develop the Dominion Wastelands campaign.
I definitely enjoyed having USE ME as the framework.  But I may not be using it at its full capability. Omer Golan included some really neat ideas in the Post Apocalypse section - specifically using Toxic Pits.  I might find a way to utilize the Blue Crystals in-game; possibly doubling the optimal range or adding +1 penetration to Dominion figures in base contact.  That would certainly change the strategy for both forces!

I decided that it was time to revisit my not-Invid Invasion game setting from a few months back.  The figures for the setting were already chosen (and given their USE ME stats), but I still wanted a unique battlefield to further develop this world. My desert table works well for colonial settings; and my red planet board is great, but was seeing too much use. I needed a new 2x2 board to represent Earth itself, but with a few twists. So, after a few evenings' work, I present the Dominion Wastelands. 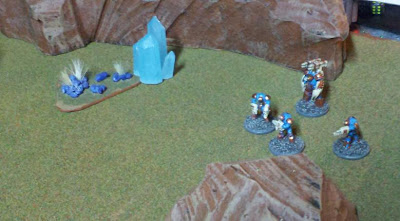 In my setting's timeline:

Earth has just begun reconstruction following a devastating war. Most of the world is still inhabitable, but the landscape has been dramatically altered. The cobalt-plasma warheads used in a global bombardment had petrified many forests, leaving hundreds of acres of deep blue stone in their place. The unusual radiation had produced gigantic crystalline formations of a completely alien nature.  The world's defenses were almost completely annihilated, and the few surviving warships were still pursuing the previous enemy. The Dominion invasion took the survivors completely by surprise.

At first, their purpose was unclear - their nature was completely different compared to the alien species that had been encountered before. But once they started enslaving the human population, it was understood what had drawn them to our world.

The Dominion wanted the crystals.

The crystals are from Gale Force Nine, as shown here before.  In that same article, you can see the test piece I made for my Dominion Wastelands battlefield. It was just a basic styrofoam hill, painted with a nutmeg-colored craft paint, flocked with a green-brown blend, and finished with some blue aquarium stones and bits of hobby grass. I liked it - it seemed like a good compromise between the type of prairie found on Earth for hundreds of years and something that you won't see anywhere on the planet today. 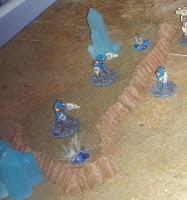 So I followed the same basic formula.  I took a 2' x 2' hunk of particle board and basecoated it with the nutmeg craft paint. While the first coat was drying, I cut another half-dozen hills out of scrap packing foam. I've found that craft paint doesn't cover styrofoam well on its own, so I basecoated the hills with some old tan acrylic house paint. Once that was applied, it was a simple matter of getting everything covered with the craft paint.

The hills dried pretty quickly, and it would still be a few coats before I was finished with the board itself. So I decided to wash over the hills with some black-tinted acrylic wood stain (cheaper than trying to use miniature inks, and easier than trying to mix my own). Once the stain had dried, I drybrushed the textured edges of all the hills and flocked the surfaces of the flat-topped ones. By now I only had about six hours worth of work into the project, spread across two evenings.

The next step was to flock the table and seal all the surfaces. A major heat wave prevented me from working outside, so I had to painstakingly flock the table indoors. I worked in four separate sections to avoid making a big mess.  Then I sealed the table and hills with watered-down Elmer's glue from a small spray bottle.

My test piece had included some tall grasses/weeds and blue rocks. But I wanted these hills to be more versatile - they would be useful in more settings if I didn't add those details. So I decided to make a few scatter terrain pieces with the weeds and aquarium rock. There was still some heavy black mounting board left over from my HOF-FT tiles, so I cut a half-dozen irregular bases from it and went to work. 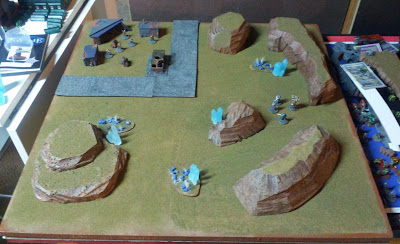 I'm quite happy with the results of the table. The hills are a bit taller than the ones on my Red Planet or desert boards - which will help if I decide to include larger mecha in these games. Human structures are easy to add from my current collection - GZG shanties and BWS Startown Slums look great as post-apoc buildings. Proxie Models and Gamecraft Minis ruins are ideal as the remains of fallen Earth cities.

I am still lacking structures for my Dominion alien invaders. But that's a project for another time!

Releases and Other News

Just some quickies from around the 15mm community: 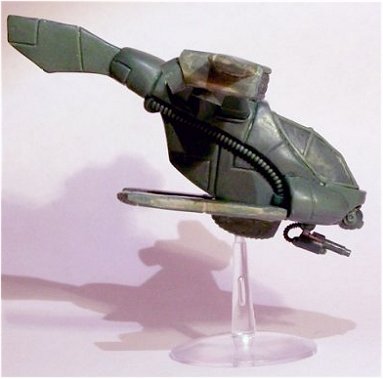 Need a project to distract you from the heat wave? Gamecraft Minis is having a 15% off sale this entire weekend.

Or if you want to get away from the normal battlefield games, the 15mm Starship Interiors are pretty darn tempting...

Even the modern and historical ranges have a lot of potential.  Many of the ruins would be great in post-apocalyptic settings.  And just to try something different, I'm going to try to sci-fi up one of these walled compounds.  It will be some kind of missionary compound for my HOF Cultist figures.


We're seeing tons of new releases this week! From Jon at Khurasan Miniatures:


"We're pleased to release the first two codes of our extremely xenophobic salamandroids, the Meso-Nai. The first code is Reach Force troopers in power armour, five models in unique poses. The second code is a Reach Force Sectionmaster and a Photon cannoneer, the heavy weapon of the section, a versatile weapon that, depending on the setting, can unleash a storm of small bursts, or one mighty burst powerful enough to break a tank tread. They are available now, here."

Check out the TMP thread for a more detailed writeup of the Meso-Nai background and a few hints about their upcoming vehicles.
Posted by Chris K. at Thursday, July 12, 2012 11 comments:

Rebel Minis added a pack of Post Apoc Raiders to their lineup today.


These figures are sold in 5-packs for $4.99.  They are obviously great minis for games such as After The Horsemen by Two Hour Wargames or USE ME Post Apoc by 15mm.Co.Uk.  Also, Thaddeus of Brock on TMP pointed out that these would be great Browncoats for a certain popular Space Western universe (or any similar colonial setting you may have created).

The second wave of Harook figures have been released by Mad Robot Miniatures.  From their blog:


We are happy to announce the release of the second wave of releases for our 15mm aliens...The Harook.
3 new sets are being offered: 2 Plasma Gunners, 2 SAW Gunners and a pair of Snipers with a Targeting Drone. Each will be sold separately so Harook players and collectors can customize their forces as they wish. 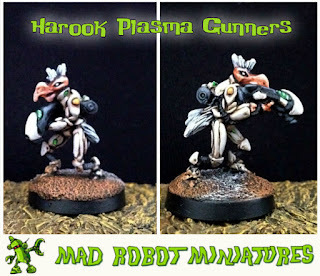 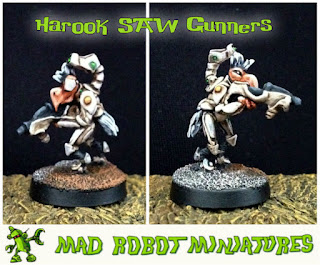 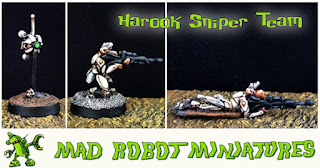 All three packs are available here on Mad Robot Miniatures' webstore. And you can see Spacejacker's post about painting these bad birds over on Tiny Solitary Soldiers.
Posted by Chris K. at Monday, July 09, 2012 2 comments: