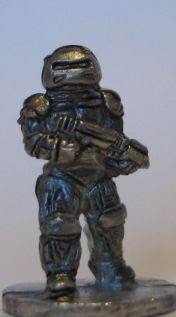 First of all, let's check out George's origins. He comes from GZG's SG15-U1: UNSC Hardsuit Marines pack. I aim to use George as our control figure against which all other 15mm Sci Fi figures, AFV's and accessories will be base lined.

I know, you are asking, why pick George out of all the figures available on the market? Well, there's something classic about George that to me at least, embodies humanity in space in the age of interstellar exploration, colonisation and of course, war. There's a certain NASA meets Traveller Imperial Marine feel which gives him an epoc spanning quality. George can also cross canons quite easily, transcending his Stargrunt origins. Due to GZG's lead in the 15mm Sci FI figure market over the past few years, a lot of gamers will have George and therefore he will be a common frame of reference.

Above all though, George is 15mm from the sole of his boot to the eye line of his visor, and of relative human dimensions for a grunt in a 'hardsuit'.

Throughout my reviews, I'll use the Barrett Measurements System, as popularised in The Courier magazine. By way of explanation, the figure is assigned a number and letter which when combined, describes his relative height and 'bulk' in comparison to other figures.

The number is the height in Millimeters from the bottom of the figure's foot (or top of the base) to it's eye. The letter refers to the "heft" of the figure: L = Light; M = Medium; and H = Heavy.

Thus George is 15M - 15mm from foot to eye and of medium build. Perfect.

I may add the occasional 'Space burger' symbol, if I think the figure had one too many Space Burger Royale's before hauling his backside onto the Dropship. It's the Irish devilment in me ;-)