Take Me To Your Leader!

"We're in the pipe 5 by 5!"
Welcome to my blog dedicated to 15mm Si Fi gaming. Why blog? Well, as you asked, to keep me sane in what will be a crazy year. Also, I rather wistfully hope, to provide focus (ha!) for my burgeoning 15mm Sci Fi collection, which now outstrips every 15mm WW2 AFV I own.

2009 is going to be a great year for 15mm Sci Fi! New ranges will be coming on stream, Ground Zero Games (a.k.a. GZG) is committed to expanding their 15mm Stargrunt miniatures and AFV's, whilst the glossy and very professionally produced Future War Commander will bring new gamers into the genre.

I began playing 15mm Sci Fi back in my latter school years durng the tail end of the 70's. Miniatures from Tabletop Games (TTG), Asguard & Citadel fought in space stations, starports and on starships. It was a 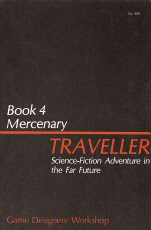 universe of Laserburn and Traveller. And then, Traveller Book 4: Mercenary changed everything. My 15mm heroes now fought on a dozen worlds no longer as adventurers, but as mercenaries, insurgents, planetary forces and Imperial Marines, backed by TTG's own hefty APC, Airfix Scorpions and Roco Minitank 1/87th Modern German AFV's.

It was a golden age, if make do. Whilst the wargaming world moved on 15mm Sci Fi not only stood still, but declined in the UK. Citadel's Traveller Minis went overseas, TTG disappeared to resurface periodically, Asguard went south. But then my own life and interests changed too.

Sometime after we slipped into the C21st, Mercenary turned up once again when we moved home. I dusted off my original Laserburn and Traveller miniatures and wanted to get back into 15mm Sci Fi. Two websites informed me of what was available/possible and generally rekindled my interest. These were Brian Burger's Brians Wagame Pages, and Andy Cowell's Smallgrunt.

This blog is a thank you and tribute to both of them and I intend it to become a single point of information, news and all things 15mm Sci F gaming for everyone who wants to climb aboard the express elevator going planetside!