Given the mixed weather this week it comes as little surprise that it's Wimbledon and lawn tennis season already.

June in Kinkydeenshire
Not really my game, but no warm blooded man should ever pass up the opportunity........and far prettier to watch than rugby. Whilst my mind lingers on beautiful Russian figures.....at the end of last month I ordered both the Flames of War WW2 Engineer-Sappers and Engineer-Sapper Flamethrower sets from Maelstrom Games. Ostensibly for and Berlin '45 Gotterdammerung and Weird World War Two games. You may remember that I discussed the potential for using them as Sci Fi Retro-Neo Soviet troops in a previous post. 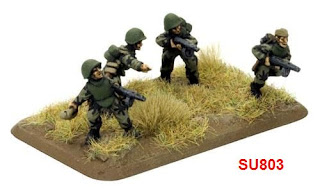 Flames of War SU803
Soviet Engineer-Sapper Platoon
Well, the miniatures arrived and are bloody brilliant! They are so stonkingly good, I'm going to make them into one of my core Sci Fi armies. 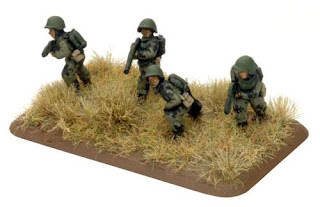 Flames of War SU804
Soviet Engineer-Sapper Flamethrowers
I was instantly smitten by the figures as they spilled out of the pack! Give these guys visors, a comms link on the side of the helmet and they will make perfect classic Traveller/Mercenary mid-tech Infantry with laser carbines, straight out of the original Traveller Book 4: Mercenary book.

The downside is that there are only 16 figures in a pack, with no officer/NCO miniatures, or heavier squad support weapons - so you'd need to purchase the standard Engineer-Sapper platoon pack for these and convert as necessary if you wanted to represent a full leg infantry platoon - However command and support elements can always be provided by APCs, drones and UAVs, especially with Future War Commander, where I will use them as the dismounts for my Hykranian mech infantry forces.

But this project is more than just putting minis on the table. I don't mind admitting that these Engineer-Sappers have given me a huge element of gaming nostalgia for the Traveller Book 4: Mercenary games of yesteryear that I want to capture again.