Lovely minis equally at home being alien pirates, slavers, mercenaries or allies. My first thoughts were to use these as ersatz Managlores (the alien mercenaries from The Fifth Element), but due to the solitary grunt sculpt (and 8 of the same miniature in the pack), I've decided there's not enough variation and am instead using the Alien Mercs to mix in with my army of ex-MJ Figures Space Orkz, (now available from The Scene). 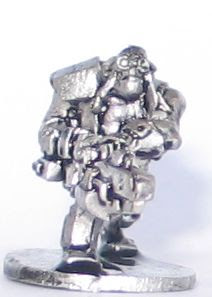 The best figure in the pack is the 'gunner' who bears a passing similarity to the Ork flamethrower operator in the W40K Dawn of War opening video (Youtube). You'll find him exactly one minute into the film sequence.

Got to say, that video is rocking! It is enough on it's own to make me want to play W40K......annnnd, back in the room.......yeah, it would have been really great if the gunner had two different heads and there was at least one more grunt sculpt, preferably two,- that would have allowed me to think of having at least a platoon of these guys as a discrete outfit selling to the highest bidder.

Nevertheless, fun minis in 15mm. After some thought, I'm going to break up the samieness of the grunt sculpt by giving them helmets, goggles, possibly even a bandana or Hannibal Lecter face mask.