Across the entire Prydian Precinct there are Planetary Militias otherwise known as Planetary Defence Forces. Each of these forces its own local designation and name but every one of them is known to the precinct as a whole by their home planet and numerical designation in the case that the star system has more than one inhabited world. Their primary role and in most cases only role is to defend their world against invasion and occupation. This they must sometimes do alone or more often with the bolstering aid of Muster and or Retained Knights from the controlling interest of that world; a Marcher Baron or the Prydian Army. Planetary forces owe their loyalty to the Marcher Baron who controls that world. In terms of numerical size the largest Planetary Militias number in the hundreds of millions on worlds such as Yordan Prime down to the smallest which number only in the dozens on foundling colonies. There is an emphasis among intra atmosphere defence forces on armour and equipment that has the smallest amount of maintenance and requires minimal training. As a result they make up for in numbers what they lack in skill against superior forces. Ease of use wins out over higher effectiveness. Often armaments are purchased or fabricated on mass by the Prydian Army or the local Marcher Baron and are based on the widely used Moth and Anvil families of weapons with additional simpler systems. Mark III Aketon non powered armour (a lower cost version of Muster Aketon MkIV armour) is the typical protection for defence forces with adaptations to local environmental conditions. These range from the closed helm and breather systems of the massive Bosworth ark cities to the bare headed and thin plates of an agri-world for standard Aketon to Cold Climes that are deployed in frozen conditions and Hot Climes in desert conditions. There are also localised space equipped troopers who protect off world outposts and moon bases. See other training series for information on Planetary Militia platoon structure, Steornede Battlesuits, Amber Portable Weapon Platforms, Amber Quad Bikes, Grima Robot Troopers and Magog GNATS. Training series searches for Colabreta and Hazelwurm along with Verticopters will provide vehicle information. All banner command level soldiers and knights must have operation knowledge of local system Planetary Militias.

Welcome to May at The Ion Age. Didn't April just shoot by in a bolt of azure energy eh! Well this month we have one central thing to say....it is Callsign Taranis time! That is correct this month will see a pre-order offer on the expansion title to Patrol Angis bringing in not only rules for vehicles and stuctures and more but also the second part of the story of the Prydian Civil War! There will be more on this in the coming week as well as some early looks at items from the book and more news too. Look out for these blog articles. For the moment we are all about IMP33 Planetary Militia Female Officer our free female miniature placed in every order during April. 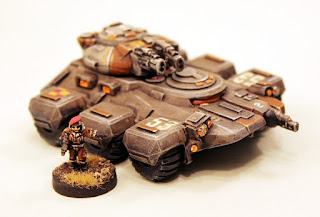 IMP33 Planetary Militia Female Officer
For the whole of May 2016 this 15mm scale Human female officer is automatically put into every order at the rate of one per order regardless of order value. It can also be bought in any amount on the monthly IMP page of the website for this month only too before being withdrawn on the first of next month. Dressed in standard PM uniform with a beret and armed with a Tumbler Mpi she is a character miniature for any sci-fi setting. The miniature is one piece in white metal and stands approx 16mm tall.

The Planetary Militia are a full force in the 15mm range of The Ion Age. They have packs of infantry and command along with battlesuits and light vehicles plus portable weapon platforms. There is also a whole platoon which includes a unique sniper miniature for free. You can see all of them on the website in this selective search HERE and HERE for vehicles. Plus discounts on two of those codes the Steornede Battlesuits both variants. 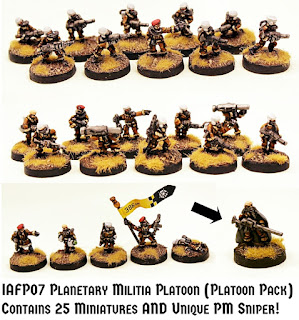 Go Planetary Militia for your near future or space opera games!