You can read more about it here on TMP: "Eureka 300 Club: WW2 Russian female soldiers" Topic 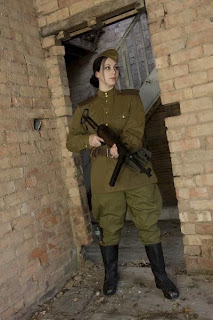 It's going to be interesting to see what sculpts come out of the project, and if there will be any potential Soviet WWW2 Zombie fighting heroines. I'll pop for 10 minis for my WW2 Soviet collection, not an earth moving number, I know, but it helps Soldadets project along.

The Red Army Heroine in the photo on the left would be fine in 15mm and could be enhanced by the addition of a Plash-Palatka rain cape.

One of my favourite ever wargame minis was a Platoon 20 Soviet figure standing with a PPSH, wearing pilotka sidecap and Plash-Palatka. He was just the epitome of Soviet soldiery.

Now, I also came across the box art below from a set of 1/35th scale Soviet WW2 miniatures.

If you can image our heroine in the photo above, in same pose but given skirt and boots with overcoat draped over shoulders in a similar manner to the female soldier in the box art - would this make a better character figure? Or should the figure in the box art be an additional figure representing a female Red Army survivor, armed with a PPSH?

Would you prefer a more combatative pose - stalking forwards perhaps, PPSH at the ready?


p.s. A present has arrived this morning in the post, a gift from Heather, as a small token for letting her have the cats and subsequently enduring this reaction to them....BLOODY STREETS: The Soviet Assault on Berlin, April 1945 by A. Stephen Hamilton.

I have no excuse now not to forge on with my Götterdämmerung. Bum! I can feel a Race to the Reichstag game coming on....oooh - FOF or Crossfire, FOF or Crossfire? - wait, I have an idea, something else entirely.......!