This dramatic Wasteland Crater is one of my favourite terrain pieces. 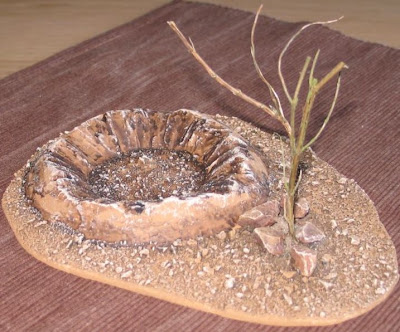 I bought several sets of craters from Amera Plastic Mouldings 'Future Zone' for my lunar landscape and couldn't resist adding a couple to my wasteland terrain. Nominally 28mm, these craters are excellent for 15mm and great value for money. I thoroughly recommend them.

The crater you see is made from the Z201 Crater Set on a 3mm MDF base (approx 9"x6"). MDF is both a joy and a curse to work with. I found that you can cut through 3mm MDF using a sharp Stanley knife with a bit of force behind it. For straight lines it's even simpler, run your Stanley along a steel ruler and then move the 'cut' to your workbench edge and simply 'snap' along the join for a clean cut (mostly). Edges can quickly and easily be tidied up with a sanding block. 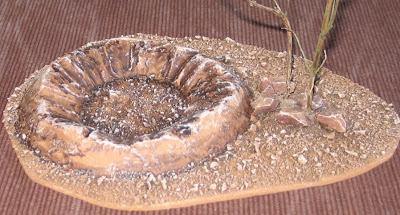 The 'rocks' are chips of 'Scottish Red' gravel from the garden. The trees are twigs taken from a dead Lavendar plant which Heather over pruned last year. This Lavendar plant lives on as a series of wasteland trees in 15mm and a 28mm Sci Fi/Fantasy Forest of Doom! Recommend you plant a couple in your garden as a renewable source of wargames terrain!

The trees were stuck in place using the granite/marble epoxy cement I've mentioned in the past. The rest of the groundwork is once again, sharp sand available from any builders merchants.

I used matt terracotta household emulsion to coat everything bar the rocks and the trees. The terracotta picks out the accent colour in my desert playing surface but also has that reddish Martain landscape feel to it. 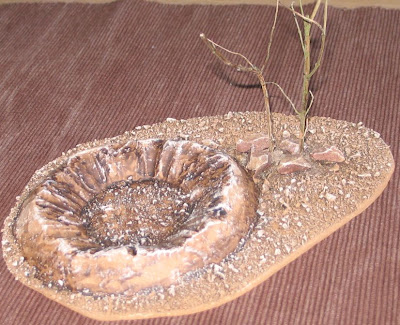 A very weak wash of Citadel Devlan Mud was applied to the base and rocks with darker coats built up on the crater itself, especially the interior. I lightly dry-sponged terracotta back over the lip and exterior of the crater, followed by the lightest of touches with a drybrush of 'stone'. Don't worry about mistakes, additional applications of Devlan Mud can hide or mute down the most cack-handed attempts at drybrushing. I speak from experience!

Finally, the sand and rocks had an equally light drybrush of a lighter sandy 'pebble' colour.

Originally, I had intended to create a yellow or brown pool inside the crater but liked the way it looked as it was, so decided to stop there. I can always go back at a later stage and do this with tinted varnish if the fancy takes me.

This terrain piece was done as a batch along with two similar craters, the whole project being completed in about an hour. Helped along by placing the craters in direct sunlight on a demi-pallet in the garden to speed up drying the PVA and again once I applied the terracotta paint.

Hope this encourages you to have a go!