On Guard in The Ion Age 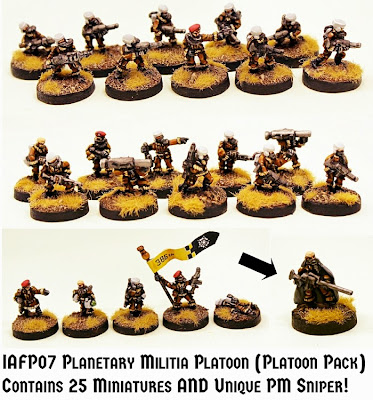 This week Gavin Syme and the folks from The Ion Age release three new packs of Planetary Militia along with a cool platoon pack that include a special miniature.

These miniature represent local ground forces and very much look the part of space opera infantry. While less flamboyant than other Ion Age troops, these miniatures still manage to look like part of that universe.

The three individual packs include two standard squads. The first (IAF067) is armed with rifles, multi-launcher, and a cannon. The second (IAF068) is an anti-armor squad armed with a combination of rifles and anti-armor weaponry. The last is the platoon command (IAF069) which represents the officers and associated troopers to lead your platoon.

These figures are perfectly suited to just about any science fiction infantry role whether it is in the Ion Age or otherwise. If you would like to read more, including the special platoon offer, head on over - HERE
Posted by Eli Arndt at Friday, February 13, 2015