Rumblings in The Ion Age

News on Armor and New Releases


Some way cool news coming from the Ion Age.

Isn't all news from the Ion Age cool?

Yes, but this is extra cool.

This week, Gavin announced his upcoming heavy armor, the Taranis. Not only does this mean new models of even heavier Ion Age vehicles but it also means a new expansion for his rules set. To bring this to life, he has tapped into the talent of the legendary Bob Naismith. 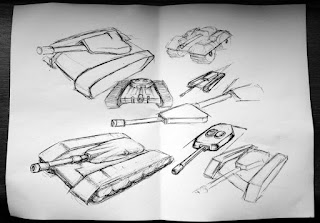 While it is just beginning, we hope to see more of this project in coming weeks.

In the meantime, we have a splendid release for Ion Age fans - IAF080 SuperBlue Adder (1 Repulsar Vehicle Kit). This is a beefed up version of the Adder, equipped with enhanced armor and  beefed up gun. 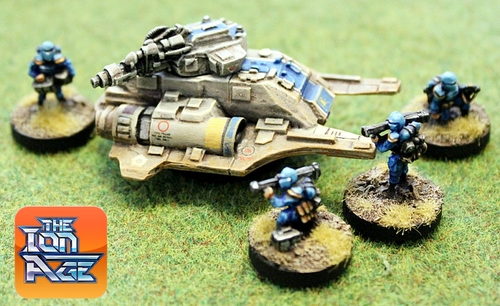 A later addition to the wide and growing Adder series of light combat hulls the Type 07 SuperBlue was commissioned in 4312IC at the New Glastronbury Targa works with the express purpose of being the best of its peer group. This mission was largely successful due to the extra effort put into its construction the care and time over and above the norm. Four tons heavier than the regulation twenty standard of the Adder series it was given a smaller than usual and expensive construct of the Podkletnov Gravity Protective Scute (PGPS) repulsar drive making the Type 07 Adder very nimble at considerable cost. Titanium Alloy armour upped from 4mm to 7mm around the rigid fabricated frame increased survival rates against incoming projectile and energy based weaponry by more than forty percent. The Type 07A is armed with a Valerin MkII 15Mw Laser Cannon with doubled heat dissipation coils allowing a more rapid rate of sustained fire against armoured targets without the weight of ammunition storage. This makes it a lethal enemy for Battlesuits and other light vehicles. SuperBlue's are crewed by two with a driver and a gunner being the norm. There is space in the vehicle for two more regular equipped soldiers or up to four at a push. There are several more unusual variants of the SuperBlue including the artillery support, the 07B which has twin Anda 60mm Missile Pods and the 07C which mounts twin Moth 88 rotary cannons however the 07P is the most experimental. It mounts a temperamental Hermit 71mm rapid fire plasma cannon with the passenger compartment given over to equipment to deal with the strain of the weapon. The majority of the SuperBlue's in active service are deployed with regular Muster Regiments fighting across the Precinct and there are smaller numbers of the Type 07 present in the armouries of the Marcher Barons too. Diodine Sparrow of the Quarrel Company has four dozen at his personal command he rates them so highly and used them to great effect during the Campaign for the Hadadan Statues. 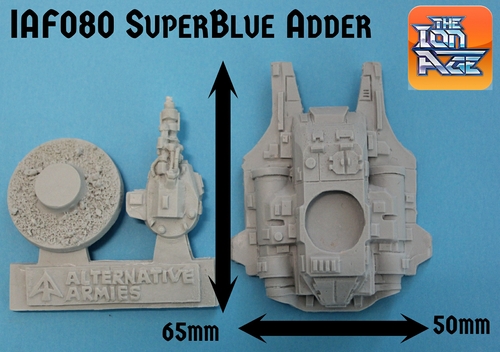 For full info on these or continuing updates on The Ion Age  read - HERE
Posted by Eli Arndt at Saturday, August 29, 2015