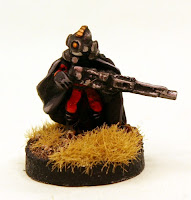 It is still very unclear what the military structural systems of the Shia Khan Empire actually are. Certainly we capture few prisoners and none of them will allow us a grasp of information that is of use. In fact I feel that the enemy, at least at the lowest echelons which we face in the fray, has no idea what their position is in their own Legion never mind anything larger. Our linguists have had no luck deciphering the guttural snarl of the Maligs tongue or the lilting tune of the few Legionaries we have taken alive. What we do know is all observed from first hand combat experience and studied from helm recordings. Not as much as we would like but unlike the Reord we do not know all. The Khanate Empire uses the Legion as its primary formation of war. We do not know how many troops are in a Legion and it seems to vary. Certainly the Styx Legion in its red glimmer suits is larger than the Cyclopes legion or the vicious Viper Legion. There are several racial types with a Legion but they seem to mix fairly freely at the platoon and lace level. We know the Khan word for platoon. It is 'Ordos' and an Ordos seems to have about thirty to thirty two members. Ordos are mixed Legionaries and others with support weapons, portable weapons, vehicles and warlords too. While our Retained are a match for most Ordos we have found that the Muster can struggle without Desteria or Havelock support. As the campaign to take back Camarthan Prime continues we shall learn more. I am sure of this. 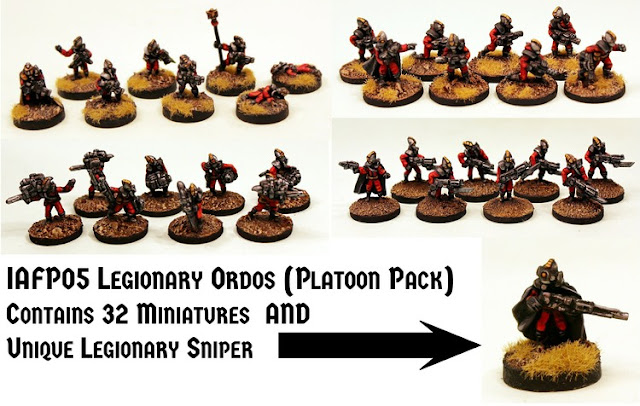 We have two new releases this month into our 15mm scale Shia Khan Empire army at The Ion Age. These are now on our website. Expanding our Legionary presence with a fourth completing Tesseran of eight in command poses plus a platoon pack containing all four Tesserans plus a unique extra free Legionary Sniper miniature only found there. If you missed it we also have a Female Battlesuit Tech miniature free this month in all orders see the articleHERE. Our two week free postage offer is now live as well meaning all orders over 10.00GBP in product are automatically free worldwide for freight. This lasts until the 18th April and you can order as often as you like plus spend your Reward Points and save more and get free shipping too! Lastly all IAF036 Adder Combat Lifters (5 variants) plus IAF038 Smashed Adder Combat Lifter are all at 25% off list price until the end of the month HERE. Stock up before the Callsign Taranis book comes your way in May.

IAFP05 Legionary Ordos Platoon Pack (with unique miniature)
This platoon pack contains a full Ordos of miniatures as well as an additional free unique miniature found only in this code. An Ordos of thirty two Legionaries composed of four Tesserans of eight glimmer suit clad Legionaries plus one Legionary Sniper with modified Laser Rifle. A full force for your wargaming table. This platoon pack is composed of the following packs: IAF006 Legionary 1st Tesseran (Juno Rifles), IAF011 Legionary 2nd Tesseran (Apollo Support), IAF018 Legionary 3rd Tesseran (Maia Mpi) and IAF123 Legionary 4th Tesseran (Command and Casualties). Legionary Sniper with modified Honus Laser Rifle. The Legions of the Shia Khan Empire are the main fighting force of the Empire. Legionaries are their core who command themselves and oversee the hordes of Malig Space Goblins and instruct the hulking Warlords too. Organised into standard Tesserans (8 Troops) and Ordos (32 Troops) they are a flexible and effective fighting force. Legionaries are respected by the Retained, equals of the Muster and feared by the Planetary Militia. This code comprises thirty three different poses of 15mm scale white metal miniatures. You have the option of purchasing a pack or three packs with a 10% saving applied on screen. Supplied Unpainted and without Bases. Go HERE 16.00GBP 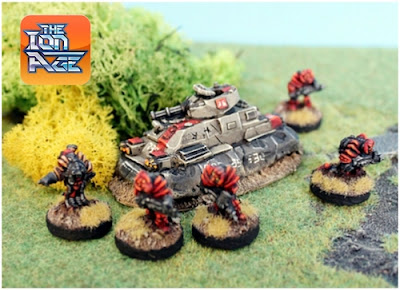 There is a good selection of Legionaries in our range which go with this new pack. As you have seen there is a Command Tesseran plus an Ordos Platoon Pack but there are also the other Tesseran codes each with eight different poses IAF006 Legionary 1st Tesseran, IAF011 Legionary 2nd Tesseran, IAF012 Legion 1st Pioneers, IAF019 Legion 2nd Pioneers andIAF018 Legionary 3rd Tesseran and IAF045 Legate Vanya. There is also IAF007 Canthus Monocycle set too. Not forgetting five codes of Malig Space Goblins, three of power armoured Nox as well as Warlords and Betrayers. Including the new packs there are now over one hundred different 15mm Khanate miniatures! Go HERE to see them all.

You have now seen all our releases for April 2016 and you know the special offer Salute Season period too plus the little lady you get free in every order so what is left to say? As always a big thank you to all the wargamers all across the world who make my dream of a space opera future a reality. Beyond this remember IMP32 is automatically put into every order at the rate of one per order regardless of order value. It can also be bought in any amount on the monthly IMP page of the website for this month only too before being withdrawn on the first of next month. You earn reward points on all orders too through your account (we NEVER send any email or such to your account its sole function is to keep your Reward Points, sign up to our email list if you want our newsletters). We realise that some of you may wish to purchase the currently free miniature to get multiples of it without placing a lot of orders so you can do just that. Visit HERE on the website for the miniature at a fair price for a special miniature.

Lastly there will be news on Callsign Taranis the expansion to Patrol Angis towards the end of this month. It has been a long time coming but its getting near. Look to the blog in late April. Stock up first with this offer of 25% off Adders HERE.