Craig at Critical Mass Games called earlier in the week to make sure my health was OK and that it wasn't getting me down. Top bloke! It's always good chatting to Craig as it's like talking with a long standing army buddy. We can pick up the converstaion right where we left it last time.
Naturally the talk gravitates to the hobby, gaming plus the latest at CMG. Craig's always open and honest about his company, the highs and lows, what works, what doesn't. Our chats present me with a priviledged insight into what it takes to run a wargames miniatures company, warts and all.
So I thought it was an appropriate time to give you an idea of what goes into creating a range of miniatures. Craig and Dale have kindly obliged by providing this exclusive look at their next alien race - ladies and gentlemen, please be upstanding for..... The Praesantia!
Developing the Praesentia
Part 1: Concept

"Our initial plan for Critical Mass Games was to create 4 unique races. So far we have successfully released three from the original four lined up when the company launched in August 2009.  In addition to this opportunity has presented a diverse selection of miniatures which together has formed the inspiring Mercenaries range.
The Praesentia are the last of the initial four races and have represented the greatest challenge.  They are representative of a tall race for grey like aliens, yet scale being what it is, the challenge is to maintain them with in the realm of 15mm without them looking like they have been rejected as small 25mm miniatures.
As can be seen in the image below the miniatures have changed somewhat in the last year.  The three Praesentia casting on the left are all test pieces under taken by different sculptors, commissioned in early 2009 to test the sculptor’s abilities and to also allow us a look at what could be achieved with 15mm sculpting.  Casting further confirms that this detail will hold up. 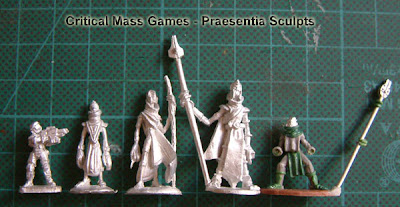 In terms of detail they all offered a glimpse of each sculptors immense talent, but scale and look wise the design was not right, too tall or too wide, and so the Praesentia where pushed back in the development cycle.
Another age old problem for the sculptor was posing, the initial artwork had the Praesentia rather static, and so this was exactly what was returned in miniature, not very inspiring!
The staff weapon carried by the Praesentia Ancient was something Dale and I both liked and having looked around for ideas agreed that the pistols from the original art work should go and the staff should be the general armament for the Praesentia, combine this with marital art staff fighting poses and movement and something was beginning to emerge.  We passed these ideas over to our artist Rob Parkinson who in turn presented us with simple studies. 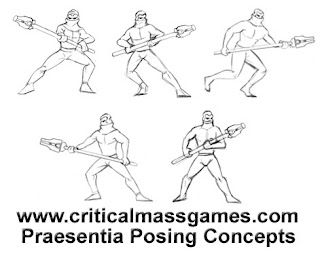 Over time built up to the finished Enlightened concepts which Phil Lewis would use as reference to sculpt the miniatures".

I must admit that I always found the idea of the Praesentia intriguing. There was something noble about the original miniatures that reminded me of some High Sci Fi artwork, from my teens and I feel they should be on an AE Van Vogt, Ray Bradbury or Frank Herbert book cover. Tomorrow night, we'll look at how Phil has translated these concept drawings into miniature with some exclusive photos of the new greens.