Here's a quick way to make any wargame table into a completely alien battlefield. 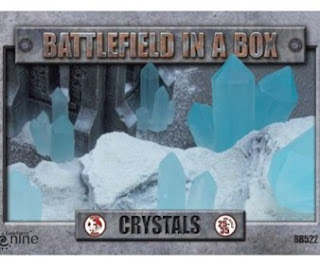 I mentioned this Gale Force Nine crystal set when talking about my not-Invid Invasion battlefield.  Recently, I had a chance to pick up one of the blue sets.  It turns out - the pictures on the website are pretty underwhelming compared to the actual product.  There are ten pieces in this set (and I assume the red and green sets use the same molds), varying from 15mm human-sized to the size of a 15mm APC.  The crystals are perfectly cast from some kind of translucent resin.  My set had no air bubbles, miscasts, or flash - they were ready to go onto the table.

Obviously, the designers had snow and ice in mind for these blue crystals.  And they do look great on snow terrain.  One set made for some pretty dense "formations" on my 2' x 2' ice-world table: 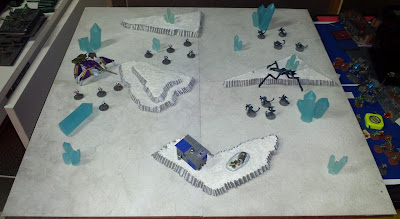 These could be spread over a much larger table and still give it an extraterrestrial feel.

One thing about these crystals - they aren't heavy.  I'd certainly base these if they were only going to be deployed on my snow board.  But I'll sacrifice stability for flexibility, because these look great on plenty of environments.  They weren't bad on my red planet board, but really stood out with my desert terrain: 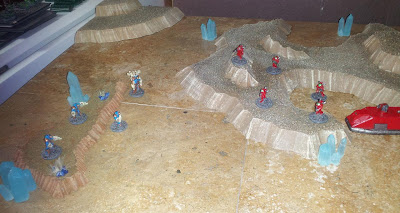 The hill on the left side of that picture is my wasteland test piece.  I'm planning to make a full board in that style for my not-Invid Invasion games.

The GF9 crystals are definitely worth every penny.  I'm going to pick up a green set next - it should look perfect on my Red Planet board, and should be equally useful for my desert and wasteland games.