Can you squeeze 15mm models into 6mm rules? 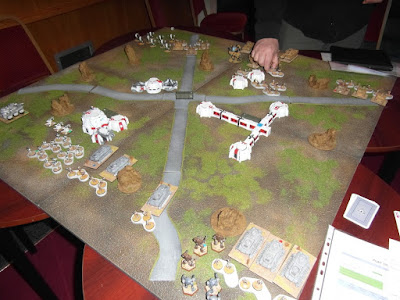 I wanted the action to start quickly in this test game so used a 4x4 table but on reflection 6x4 would have been better.

I have been a big fan of Fireteam Andromeda rules for the past couple of years. They have great tactical depth with their unique command and control system. They would remain my rule set of choice for serious competitive play. In recent times though I have hankered after a rule set that was a bit lighter and allowed me to get more of my ever expanding model collection on table at once, especially vehicles.

Laserstorm rules are designed for massive battles using 6mm models. The minimum suggested game size is around nine units a side. A unit being three standard vehicles or field guns, 4 light vehicles, 6 infantry stands or one super heavy vehicle or behemoth. This is the sort of size of game I have played so far. Units are arranged into three battle groups of roughly equal size. Weapon ranges seem fine used unmodified in 15mm. The rules suggest infantry stands of 4-6 models but my figure collection would not stretch to that. I chose stands of 3 models so that my standard units of 20 models could form an infantry unit. It also takes up less real estate on table. Purists may argue that three figures do not make a fire team but it looks OK to me.

Deployment and activation is by battle groups which are represented by a playing card. Also added to the deck are snap fire cards which allow one side to make a single unit fire or move out of sequence.

The rules are very simple and elegant to the extent that you find yourself wondering why has no one done this before. Units have a score to hit on their stat line. If there is not a clear line of sight to all of the target unit or if the target is in terrain the firing unit has to roll higher than their base "aim" stat, effectively a -1 modifier. Weapons are divided into three categories general purpose, anti infantry and anti tank. Fire at the wrong category of target for your weapon type you automatically need an unmodified 6 to hit. That is it! It sounds ridiculously simple but it just seems to work.

Targets get a saving roll based on their class. Infantry and light vehicles save on 1D6, vehicles on the sum of 2D6, super heavies on the sum of 3D6 and behemoths on the sum of 4D6. Vehicles save on only 1D6 in assault so are vulnerable to being overrun by infantry. Units will have a saving roll typically in the range of 3+ to 6+ which is modified by the power of the attacking weapon system. For example an autocannon field gun has a save modifier of -2. So firing on a scout walker unit with a save value of 5+ the walkers would need 7+ to save on the sum of 2D6. If they failed any save and were in cover they would get an additional saving roll of 5+. In the above example infantry in the open with an identical save value of 5+ would be destroyed being unable to roll a 7 on 1D6. So infantry and light vehicles get a massive boost to survivability by being in cover. This system means practically anything has some chance (although it may be tiny) of destroying any target.

Casualties are removed from the nearest model to the firing unit working backwards. A score of 1 to hit is a 3" pushback working from the nearest model after casualties are removed. Victory is decided by scoring points at the end of each turn for uncontested control of victory point locations. This casualty and push back system means there is a great degree of uncertainty over being confident you will hold or contest any given objective at turn end. 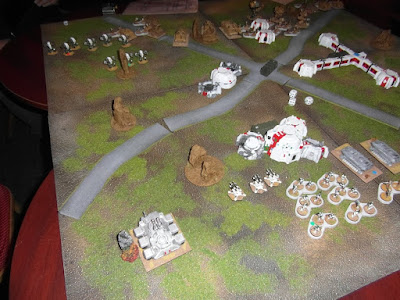 Disaster struck this super heavy tank early in my last game. Rolling two ones out of three save dice it failed by 1 to avoid being destroyed by the tanks main guns.

When a unit takes sufficient casualties (one or two depending on size and class) it must make a morale test. This is a simple unmodified score on 1D6. A fail means morale has broken for that moment. If playing in 6mm I think I would use the detailed rules on commanders and regrouping but in 15mm it just seems wrong. An alternative given in the rules is that the unit has to retreat 12" and this works fine.

The rules give three options for unit building. From scratch, add weapons to a chassis or ready made units. The first army list book has just been released. The points system if using the ready made units seems fine. It could be exploited by those determined to win. For example you could give your infantry RPG's a massive range boost for only a few extra points. The points system is under review and I am sure will be updated as players report in. You can alter every stat and add traits and special abilities to units and weapon system. There is enough here to cover every conceivable unit type and hero units if you want them. Alas for me this detailed pointing system (which I highly commend) is just too much for my maths skills. It is crying out for computer aid via a spreadsheet or online army builder. Anyone care to take up the challenge? Get the authors permission first of course. 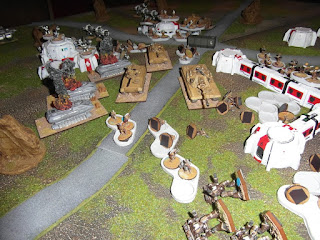 Tanks burst through Naga lines wiping out all opposition.

So does it work in 15mm? For me I will answer yes with a couple of provisos. Even if you have the models you don't have the room to fit in the large numbers of heavy vehicles the system is suggesting to use. Unless of course you happen to have a massive gaming table. On a standard table 6x4 I don't think I would push much beyond 12 units a side, but compared to a lot of games I see being played that is still a huge amount of figures. There is fair amount of luck in the game which is emphasised if using a relatively small number of units. For me it is an acceptable level in view of the fast play time. The photos are from a game with someone playing for the first time and the game completed in 2 hours from deploying to winner declared.

If you do have a collection with lots of light vehicles (with a small footprint) like Battlesuits and lots of infantry these rules may suit you down to the ground. I can't help thinking they would work equally well for modern games. I think they would work spectacularly well if you are lucky enough to have an urban terrain board.

In fact these rules are so good you might just be tempted to start a 6mm collection.