Ain't she just the most lovely thing you ever did see!

Wednesday 2nd December 2015 will see the start of the pre-orders otherwise known as the the Early Supporter Offers (ESO's) on the final of the four modes of propulsion Taranis Main Battle Tanks in 15mm scale; the Repulsar (Anti-Gravity) variants. Designed by industry legend Bob Naismith there will be five variants of the IAF103 Taranis Replusar MBT as there have been with the tracked, wheeled and lifter (hover) Taranis that are already released.

Alongside the most space opera of the Taranis Tanks and also sculpted by Bob Naismith will be the IAF082 Taranis Repulsar Drones five different anti-gravity robots. The Early Supporter Offers will run for nine days with all orders containing one or more Taranis Repulsar Tanks being shipped out worldwide on Monday 11th December 2015 in time for Christmas.

Taranis Repulsar Tank with Energy Turret next to Repulsar Drones

Full details will be given at the time but the Early Supporter Offers will be upon the following codes:

The offers will be the same as before with 5% off a single Taranis or 10% off three of the same Taranis or a super 15% off a set of five one of each Taranis. Every Taranis pre-ordered will come with a FREE pack of five different Repulsar Drones so that is one pack with one tank, three packs with three tanks and five packs with five tanks. On top of this you will get the IMP28 Missiletoe Claus free monthly miniature worth 0.60GBP in your order automatically and you will get Reward Points on your account for your orders which can be used for future discounts and free items too. The release price of all variants of IAF103 (each of them made of several parts and over 100mm long) will be 20.00GBP and the release price of the pack of five IAF082 drones will be 5.00GBP so you can save greatly by picking up an deal or two for yourself. Designed, Manufactured and Shipped all from the UK. These offers will be on ourEarly Supporter Page. 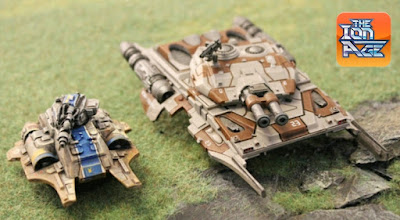 There will be articles to follow in the coming week which will give you more information. These will be one per day on these subjects: 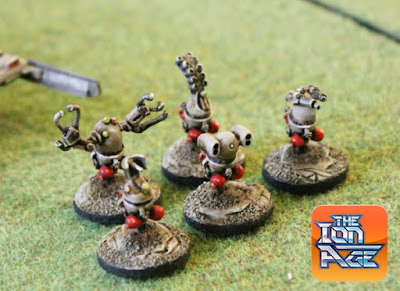 I want to thank everyone from across the world who took us up on Taranis Tracked Tanks, Taranis Wheeled Tanks, Taranis Lifter Tanks and Taranis Running Drones all HERE. This December will see the last of the four propulsion types released and the completion of the whole initial range of twenty different Taranis into The Ion Age before we move on into the New Year.