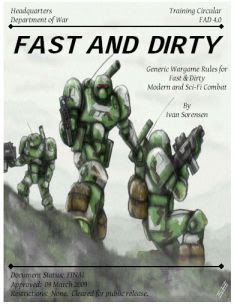 From: Fast And Dirty

70 pages, A4, B&W illustrations throughout:

Ground scale is not determined and described as 'relative' to the eye.

Miniatures are based individually but must be organised into Squads

GAME LENGTH:
2 hours plus depending upon number of figures and type of scenario

UNIT STATS:
Each Squad unit will have the following basic stats which create it's unique profile: QUALITY/RESOLVE/MOVEMENT/ARMOUR/WEAPONS

Squad Resolve determines how committed the unit is to achieving it's objective.

Movement is the base movement rate for infantry or vehicle type.

Weapons are your arms and their offensive capability.

The best way to describe FAST AND DIRTY (FAD) is probably as Stargrunt without the pain. It is a superb set of generic platoon level rules that encourages tactical play and feels more like a platoon level game rather than a individual skirmish with 30 individuals running around who happen to be wearing the same uniform.

The game is based around simple d6 rule elements that click into place very easily. The unit, weapon and personnel traits add character to the game and a lot of fun on the tabletop without.

I have to say that the most glaring ommission from the rules is that whilst there are Modern/Sci Fi weapons aplenty, the electronic command, control and communications that will be a defining aspect of future combat are missing. I think these should be the basic building block upon which all Futuristic and Sci Fi military combat games are built.

Ivan has made this a complete game for the gamer through including simple but effective rules for force generation, scenario creation together with a playable campaign system.

Ivan has broadened the use of the rules with two recent add-ons: