My Cimmerian Mercenary Mech company is languishing in a big sulk. Well, I'm the one in a sulk as I'm having a complete arse of a time painting this 15mm armour to bring about my vision of a camo scheme inspired by the patterns on a granite rock.

Sometimes you just have to walk away with dignity and sneak up on the problem when it's not l00king!

So, to keep my spirits up rather than downing some spirits, I decided to see if I could replicate the success of my Green HALO SPARTAN with a test figure for Blue Team. 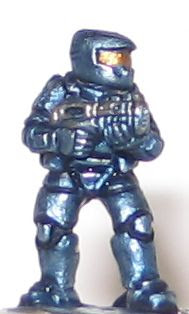 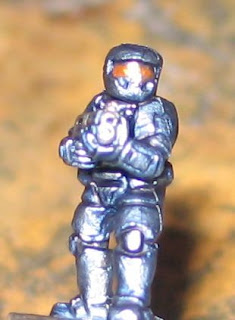 You Looking at Me?

Once again two coats of Citadel Washes, onto the bare metal casting, in this case Asurmen Blue. No primer or undercoat. To speed things up, I carefully drybrushed Bolt Gun Metal over the rifle, leaving the dark blue wash in the detail of the weapon. A quick brush of Citadel Shining Gold on the visor completes the effect. I'd say no more than 45 seconds paintbrush time all told, not allowing for drying time between the two blue washes. The visor taking 10-15 seconds of that.

The figure is darker in actuality, a deep Oxford blue, but the camera flash bleaches the colours. The blue doesn't have the same 'shimmer' of the green miniature, but looks great nevertheless.

I was tempted to add some extra detailing, such as a stylised Greek Spartan helmet onto his right shoulder pad and some dots of colour as LED's on his backpack - but I wisely thought "don't push your luck tonight, quit whilst you're ahead and feel enthused".