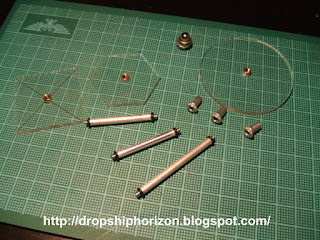 A couple of days ago I found a small package from CorSec Engineering waiting for me as I got home. It contained review copies of a few of their products, the most intriguing being their Omni-Stand system - a new type of detachable and re-attachable flying stand. There were also a few different dice docks and their new plasma/flamer template(s) for 5150: Star Army in the package.

First off, "who are CorSec Engineering?" some of you might think. It's a fairly young company and so far they are mostly known in spaceship gaming gaming circles because of their space gaming mats, flying stands and other space/naval themed products. However, Jonathan is also an avid 15mm gamer and he has a long list of future products he would like to make. Besides gaming aides like tokens and templates they have roads and a corridor system is in the works and further down the line we will hopefully see some futuristic urban terrain for 15mm terrain as well! Jonathan is sure to point out that this is a fair bit off though, so don't start holding your breath quite yet.

Over to the review!

As I was most curious about the Omni-Stand lets start there. I was planning to try them out on a couple of GZG VTOL gunships, but then I remembered that I hadn't actually ordered them yet. So for this article I used one of my EDF battleships as a stand in, but it applies just as well to 15mm gaming. Imagine it being a nice big hovertank and you'll be fine. Anyway...

Being a starship gamer I've battled with this problem before; should I simply glue the flying stands to the model, meaning they will be that much more cumbersome to transport, or should I leave them un-glued, meaning that the model will (at best) not be that stable and tend to swivel around - that is if it's even possible to detach and re-attach the stand at all. I used to glue mine, but as got more and more models it was simply not practical any more. So I started thinking about alternatives. I've experimented with inserting magnets in the top of the stand and in the model and while that does kind of work it doesn't feel entirely secure. And if you have any kind of scenic base (like for a hovertank!) you can pretty much forget about it as it will probably weigh too much for the magnets to cope. Another solution I had been considering was using some kind of screw mechanism and fasten it that way but my experiments have all lead to a rather unsightly clump underneath the model. 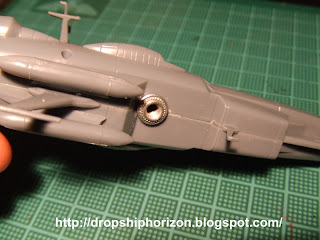 The mount glued to the model. 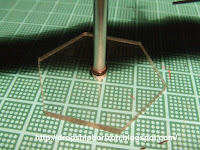 Now CorSec Engineering has released a much more refined version of the screw mechanism than I ever managed to come up with. They call it the Omni-Stand and it consists of the acrylic base itself, the metal peg and the actual mount which is also metal. The peg connects to the base and the mount by way of the screws at either end. So you glue the mount to the model and then simply screw the stand together (if you don't understand what I'm on about here's a video)! It's very sturdy and infinitely reusable. One thing I was worried about at first was that you would have to be very careful how you glued the mount to the model to be sure the base was aligned in the right position when you screwed it on. This little problem has been solved by adding small rubber "washers" to both ends of the stand which allows you to perfectly adjust the model each time you mount it. It's a small thing, but it shows that quite a bit of thought has been put into this system. 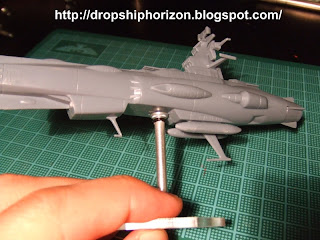 As you can see the mount is discrete and doesn't interfere much with the design of the model. 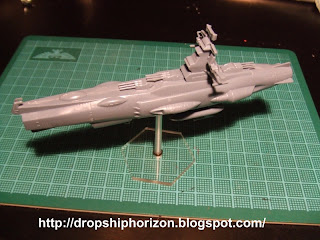 There we go. Ready for some paint!

It's also worth mentioning that there are several different additions to the stands, like the telescoping rod and the different magnet additions.

The only thing that might put some people off this product is the fact that the peg is metal and not transparent acrylic. It's not a problem at all if you paint your stands but if you prefer the clear look you might want to think a twice about it. To me the benefits with this system far outweighs this fact and I think it's a small price to pay to be able to dissasemble and re-assemble your flying stands this easily. I might come across like some telemarketer here, but I really like these things! If you want to see more just check out the homepage, especially the tutorials. 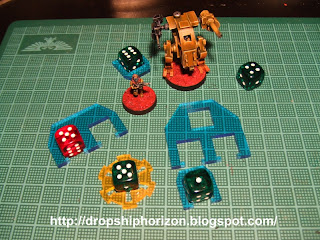 Different dice docks (I like the orange mine dock!) with some of my 15mm minis for scale. 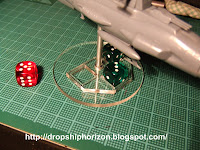 The dice docks are made mostly to mark book keeping dice on the tabletop so you don't pick them up by mistake and work as intended. There are also dice docks made to use with the Omni-Stand and while these have been made mostly with starship gaming in mind I can see how having a gravtank's hit points etc displayed right there on the stand could come in handy. 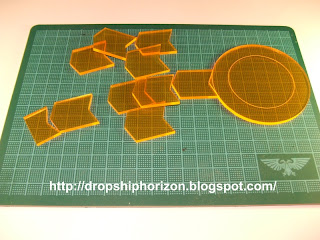 The plasma/flamer template for 5150: Star Army is made up of a three inch acrylic template to place at the point of impact and a set of ten one inch long 'puzzle pieces' that you can lay out along the lane of fire. In the 5150 rules these weapons create effects that remain on table so you need some way of marking it. This set provides a quick way of doing that. I don't know how common these weapons are in the game, but this seems like a nifty solution! 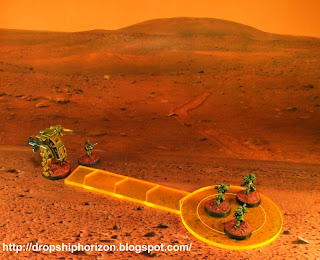 For us 15mm gamers I think CorSec is definitely a company to keep an eye on. There aren't all that many non-affiliated companies out there making gaming aides in general and especially not for 15mm. Their selection might be a bit limited at the moment but it will grow with time. Jonathan told me that the problem they're facing is the fractured nature of 15mm gaming which makes it hard to know where to focus their resources. He is eagerly waiting to see what happens with Tomorrow's War and if that will help unite our community. Also, I'm sure Jonathan and the others at CorSec would appreciate any input you have. Let your voice be heard in the comments!
Posted by Martin at Tuesday, September 13, 2011