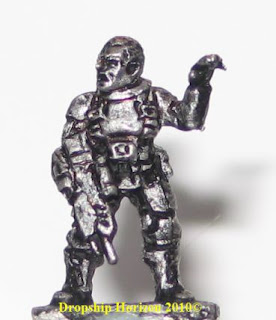 I've not quite fully captured his profile in the photo, but believe me, he makes a great Edmund Blackadder character -

- interstellar renegade, mercenary, hero, pirate, bounty hunter and coward, all rolled into one!

Hoorah!
.
Sorry, I had to revisit this entry. What about the rest of the Earth Force Armoured Troopers? In one word, disppointing. I'd been quite encouraged by these minis when I saw the photo on the webstore. OK the poses were cheesy, but they had a certain 1970's Traveller'esque appeal to them.
How right I was - The minis are only 14mm foot to eye, which makes them half a head shorter than the Earth Force Marines - they match RAFM's ex-Citadel classic Traveller miniatures designed in the 1970's, which themselves are smaller 15's.


The detailing is soft and not as crisp as the Earth Force Marines, though to be fair there's plenty of it. The helmet on the firing figures, doesn't look right and overall they are simply amateur when compared with other leading figures on the market, even by the same sculptor.