A Blast from the Past. Naboo Hanger Action Set

Several weeks ago, Master Chef and I found that we'd reached an impasse of sorts. Due to work we found that we had less and less time or energy for set piece games in the evening. Any new ideas needed new terrain and even if you are playing on a 2x2 or 3x3 foot table you still need plenty of it to make the visually interesting and tactically challenging.

The growing number of superb 'character' figures available in 15mm, such as Critical Mass Games' Merc series has also led us to want to play more quick and dirty character based skirmish games. Set up quickly, we can have two or three games in an evening with plenty of time to enjoy a drink and a chat.

The secret of how to accomplish this came from playing Mass Effect 2 on the XBox. Analysing the action, we found that whilst some of the sets were very elaborate, there was little in the way of running gun-battles. Instead the characters moved from one action point to another (normally identified by lot's of low cover to hide behind!), where they slugged it out with the bad guys and moved on.

Even though we all like the idea of a big table, let's face it - whether you are deploying a company, platoon, squad or just 2-3 guys per side, what it boils down to is a bit of long range sniping, a lot of Panzerbush syndrome as the figures move in a clump from cover to cover until the final denoument an hour or so later where it's fists, claws, and Blasters at point blank range.

So I thought - "Pizza bases!" We could capture all the action if a 15mm or 20mm skirmish game within the area of a 12" pizza base. A 'simple' action can be fought on one pizza base, whilst a more sohpisticated game could be fought across 2 or 3 pizza bases. More on these anon......

With the seed firmly planted in my mind, I remembered that Star Wars Micro Machines once produced some roughly HO scale action sets. Lo and behold! I found a Star Wars Episode 1 Naboo Hanger - Final Combat set on Ebay for around a fiver. 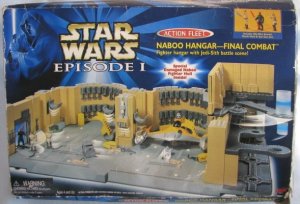 It arrived the week before Christmas. Heather and I were at home when the parcel came, and I am not ashamed to admit that we were transported back to being kids again. It was like a Christmas morning 35 years ago, the two of us excitedly opening the box, putting it all together and then dualling with the plastic figures included, makinge Lightsaber and blaster sounds. I guess you had to be there, but it was a real blast!

Seriously though - if you can get your hands on the Action Fleet NABOO HANGER - FINAL COMBAT  set for a reasonable price - do. It's instant terrain at it's best.