.
If you are looking for a quick and simple stocking filler for Christmas, Critical Mass Games will oblige with their newest releases, which will be available on Monday.

MERC11: "The Freakshow" Mercenary Fighters
5 unique figures for £2.90
(click on image for larger picture)
I'm sure everyone will have their own favourite and mine is the Terminator'esque 'Gatling Freak' on the far left, with a half human, half android/robot skull. 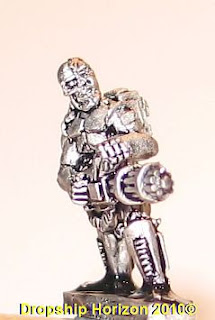 Next for release on Monday, Merc 12: Protolene Mercenary Fighters - 4 unique figures for £2.90. Four very nice 'Space Doggies' with a mix of weaponry that makes them a decent group of adventurers or ships crew. They could also be a discrete unit of Mercs operating on their own or embedded amongst the humankind.

MERC12: Protolene Mercenary Fighters
4 unique figures for £2.90
(click on image for larger picture)
Finally, the first two packs of a new alien race, the Praesentia. We took a look at the Praesentia, how they were conceived and developed, back in October (click here).