In The Pipe........ Revolutionary Firepower

.
Way back when, in my early days of playing 15mm Sci Fi with classic Traveller: Book 4 Mercenary, 1977-80,  I conceived the idea of an orbital-dropped, 'spider-legged', A.I. battlefied MRLS artillery drone battery to support my ground troops. 30 years later, following some discussion, the combined talents of Jon at Khurasan and John Bear Ross, have brought my vision to life and gone a step further to realise a family of Near Future and Sci Fi combat drones.

I can exclusively reveal the "Automata of the Revolution" series war robots developed by Nova Respublik to give the infantry mobile heavy firepower. They are all given heroic revolutionary names, but the soldiers think of them as beloved girlfriends or doting mothers because of their helpfulness on the battlefield. Fondly called the "darling little robots," each type is given an unofficial nickname by the grunts by which they are more commonly known. 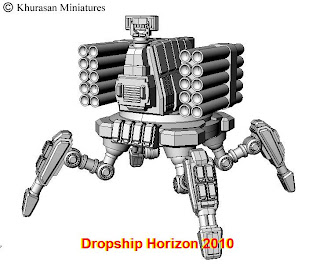 The Marka is an MLRS variant and can fire 20 high explosive rockets by direct or indirect fire. The original idea grew from a book I received one Christmas which had a dramatic photo of a T66 'Honeycomb' 4.5" rocket launcher being used by US Marines in Korea. 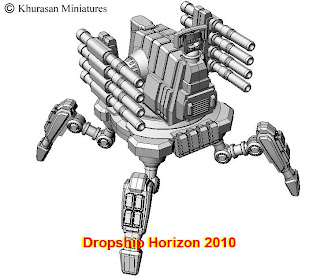 The Olyusha ("darling little Olga") variant has eight heavy anti-material missile tubes to take on enemy tanks and walkers. This is Jon's baby. Inspired by the Pentomic era M50 Ontos, with a little input from yours truly. 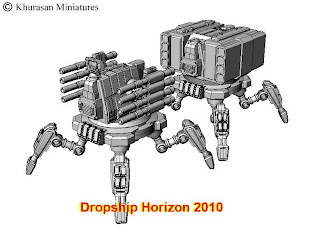 The Zhenia ("darling little Evgenia") is an ammo carrier robot capable of  resupplying any of the other Darling Little series. The front of the Zhenia is designed to feed ammo directly into the rear of the shooter bots. 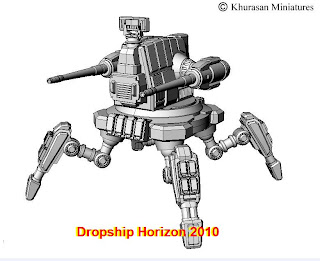 The "Little Darling" series are approximately 28mm tall, and they will be ideal as either heavy infantry support robots in 15mm/20mm scale or sentry robots in 28mm scale. They are scheduled to be available in late winter or early spring.