.
Whilst the camera was to hand tonight, I managed to get some better shots of a couple of Khurasan's upcoming Ti Mohnids. These are big brutes and I like them for that. They ooze both hideous menace and bags of character. Ideal as an integral part of any anti-human alien covenant. 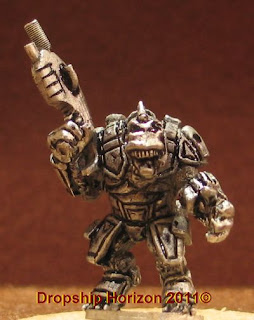 Khurasan 15mm Sci Fi
Ti Mohnid Captain
I swear the Captain is chompin' on a cigar! And as for Gene Simmonds below........ 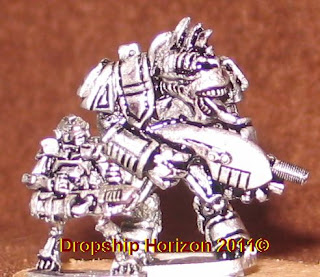 Khurasan 15mm Sci Fi
Ti Mohnid with Felid Prodeguard gunner for comparison
These guys out Garn the Garn. In fact, I think they out gun every biological lifeform on two legs in 15mm! It goes without saying that the enourmous size of these Ti Mohnid extends their potential to 20mm and 28mm games as well.

Masterful figures that still feel like they belong to our 15mm 'Verse and bring that added WOW factor to the tabletop. Available from Khurasan soon. Watch for announcements.