This is an after action report of a recent game I had of Fireteam Andromeda with a gaming buddy and good friend Gary.

This was a pretty standard game of FA using one platoon each to a value of 1000 points.  The battle was over a mining complex.

Gary chose to play the Naga, a high tech army of space snakes from Critical Mass Games.  He chose a generic platoon which gave him access to the one vehicle unit he used of mini mechs counting as Battle Suits.  His force was made up as follows.  A field commander, 2 NCO's, 3 units of infantry each with their own support weapon and an attached weapon, 2 units of Vampirra power armour infantry, a unit of scouts with their own attached Grav transport and a unit of Mini Mech Battle suits.  The scouts, and power armour units are all good in assault.  The infantry squads pack a lot of punch with the extra weapons.  The mini mechs are armed with pulse cannons and also grenade launchers which are deadly to all at close range.


I played the Republican Guard, the elite section of my human faction.  Being an infantry platoon they had no access to vehicles besides transport but could field heavier infantry weapons.  My army comprised of the following.  A field commander, a NCO, 6 units of regular infantry 2 of which had attached APC's, a unit of HMG teams, 1 unit of missile mortars and 2 heavy weapons teams of heavy pulse cannons.  All my infantry is superior giving a better chance to hit and pass morale tests.  There small arms are missile based so ignore the effects of cover.  My mortars have a good blast area of 5".  My heavy pulse cannons are super long ranged at 36".

In Fireteam Andromeda at the start of a game you roll for deployment zones and the type of scenario.  I think this is a really good way of keeping games fresh.  It also means you have to play a force able to be competitive in all three of the potential scenarios. This game was to be the scenario "take and hold" and would be decided purely on control of objectives at the end of turn four.  Only basic infantry and commanders can take control of an objective although any unit can dispute that control.  Deployment was to be 12" in on the short table edges.  I won initiative and opted to deploy first knowing that I had paid to deploy my weapons teams as hidden, so they would deploy last anyway in any terrain at least 12" away from enemy.  Another perk of being an infantry platoon.  In return for deploying first I also get +2 initiative on the first turn.  Gary gets to chose his side of the table.
Deployment

As buildings block line of sight but the wall does not I deploy my long range heavy pulse cannons to the two flanks.  I put my mortars and HMG's towards the centre and spread out with the rest of my infantry.  As this game is all about objectives I use my 2 APC's as transports.
Battle Plan

I hope my pulse cannons will control the flanks.  My weapons teams in the centre should be able to give any advance by the Naga a hard time.  My infantry has no alternative but to run forward as fast as possible to try to get to the objectives.

Play alternates between players in Fireteam Andromeda with players being able to spend a number of commands in a given phase based on leadership, in our case two each.  The total number of commands available is equal to the number of units on table, confident and not in assault.  We use crystals to represent commands.

I fire my mortars first using an extra command to get a bonus to hit.  I fire at the Battle Suits but miss deviating into the infantry at the rear causing one casualty.  Gary advances infantry on my right flank fires the attached pulse cannon but misses.  So the turn plays out with lots of advancing and ineffectual fire.  My HMG's take out one of the Naga scouts when they unload from their transport into the building in the centre.

Gary continues with an all round advance, the mini mechs destroying the wall as they pass through.  My heavy pulse cannon gets a bead on the mini mechs.  It has a Rate Of Fire (ROF) of 5 so gets five dice to hit.  Only one hits.  It needs a six to disable a mini mech and I get it!  This is a major blow to Gary unless he can remove the damage when he next activates the unit he is stuck being unable to break unit cohesion of 3".  He fails to do so on his next activation.

On the right Naga Infantry shoot up my heavy pulse cannon shaking it and causing 1 of 3 wounds.  My mortars pound the advancing Vampirra power armour but the hits just bounce off their armour.  Oh heck they are within charge range of my mortars already! 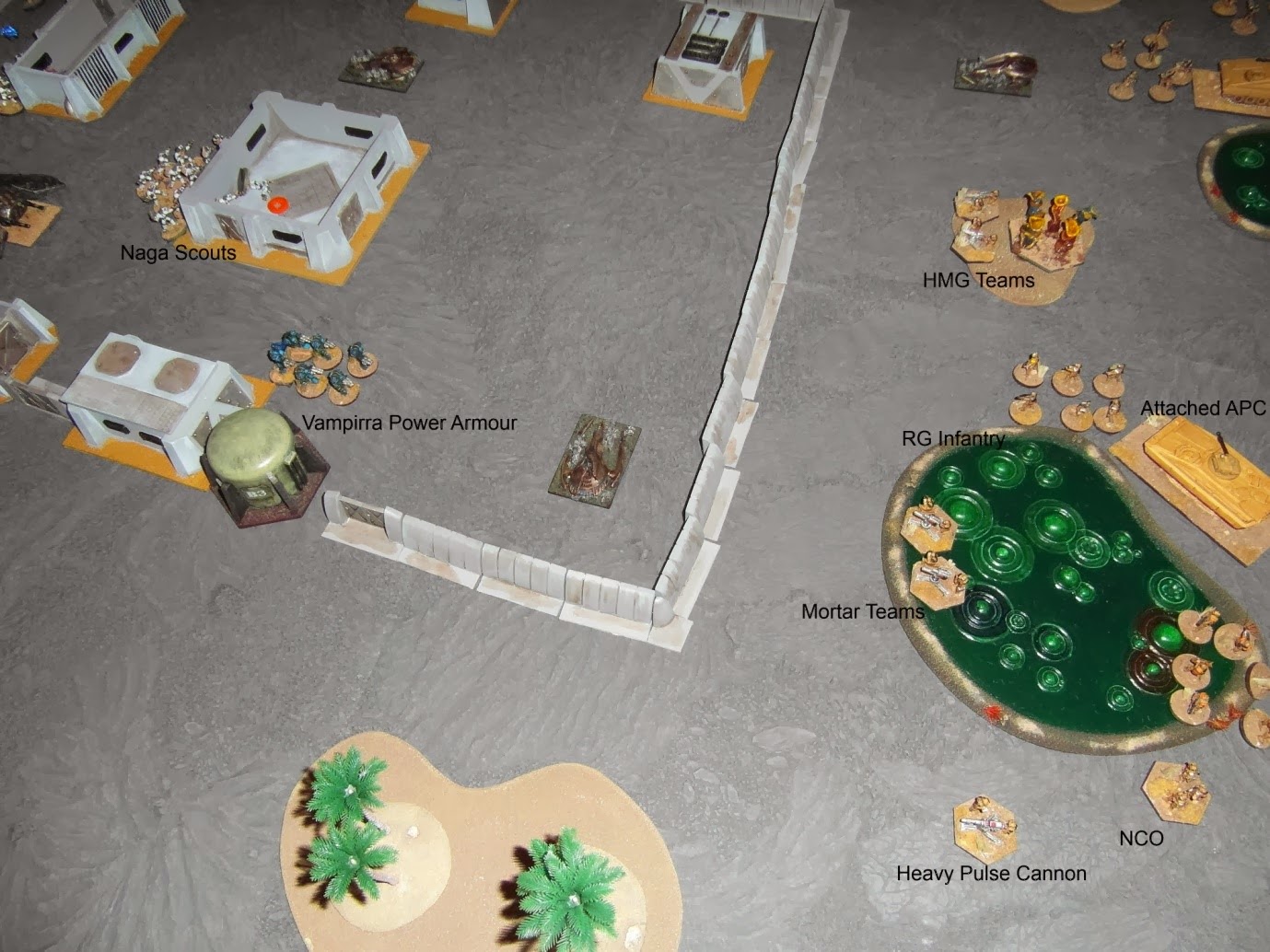 The Vampirra power armour suits are specifically designed for speedy assault.  To reflect this I play them as having the "jump infantry" trait.  I rue the moment I decide to advance the infantry squad on the right into the toxic pool.  Infantry in terrain  roll dice to see far you can move.  This pool proves to be very sticky to move in as I roll low for the next two turns.

My HMG teams in the centre fire on the Naga scouts causing three casualties and their morale to break leaving them shaken.  I am really worried by the Vampirra and shoot at them with two infantry squads causing 3 casualties.  This still does not stop them and they assault an APC I have brought up to the wall.  In assault they cannot be shot at.  Assaults are resolved at the end of the turn.  The green marker means the APC uses a command to fire at them as they come in.  The orange markers are shaken tokens.


Meanwhile on the right the other unit of Vampirra assault one of my infantry squads.  As they have 3 attack dice each to one of mine and far better armour it is looking bleak for the infantry squad that went an inch too far.  As the unit is confident (not shaken) I can pay a command and fire as the Vampirra come in.  I miss.  Hand to hand follows, everyone misses what a relief!

Naga infantry on the left causes three casualties on my infantry in the centre.  The Naga APC advances and in an amazing run of luck wipes out an entire infantry squad.


Meanwhile the APC on the left also lets rip with it's LMG at the assaulting Vampirra as they come in.  I can't believe it 4 hits...which bounce off their power armour.  The ensuing melee brings predictable doom to the APC.

I advance my commander on the right but he is a couple of yards short of claiming the objective.

Gary pushes his luck with the APC and tries to take out a second squad, this squad uses a command to return fire and knocks out the APC.  Which also means it cannot dispute the nearby objective. 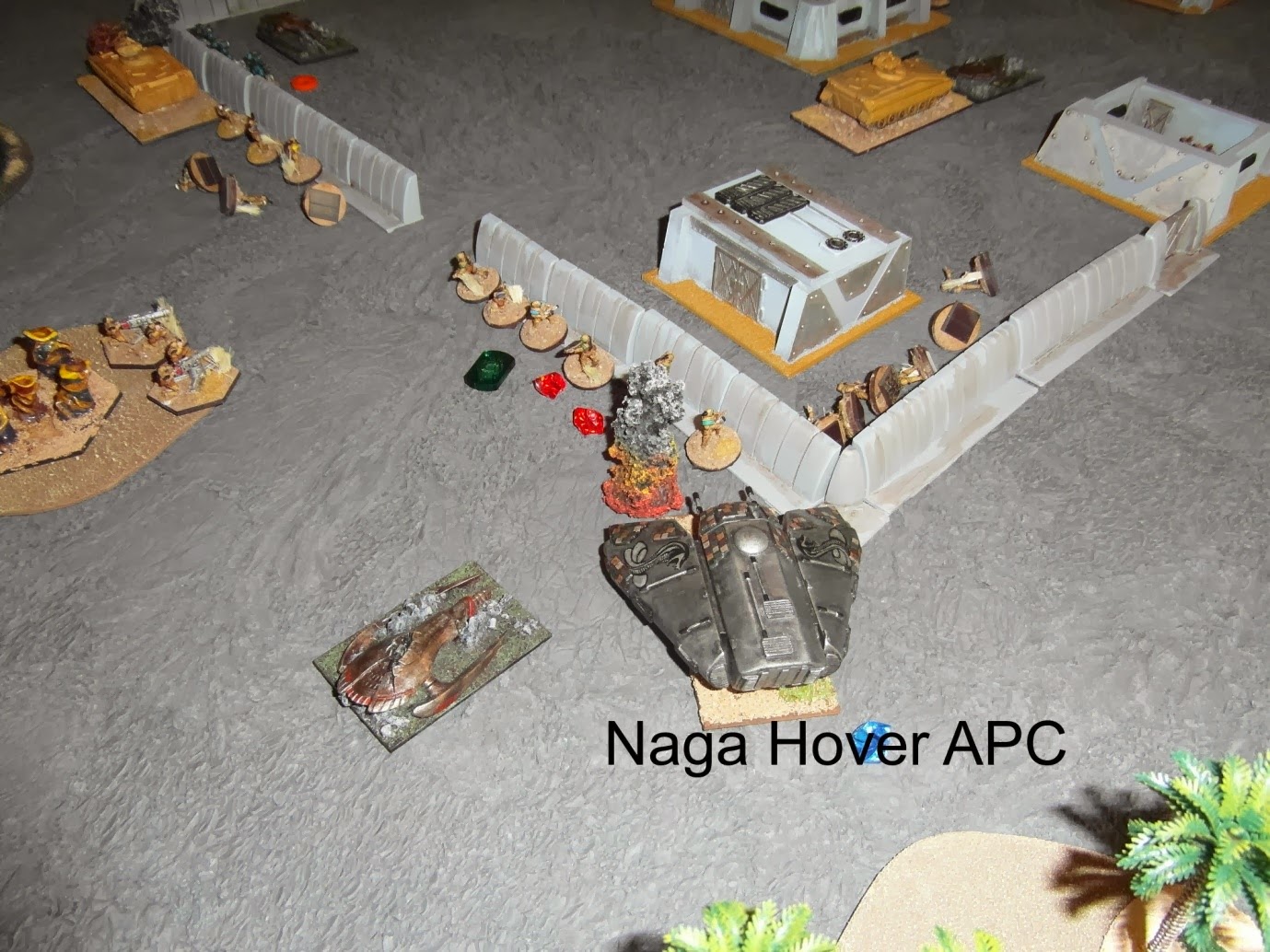 Confident units who are shot at can return fire at a unit which shoots at them as long as they don't get shaken by the incoming fire.  This often catches opponents out when they shoot at one of your good units.

I try a similar trick in the centre and Gary uses his scouts to assault my APC.

Gary brings over a commander to help with the repairs on the mini mechs and succeeds.  They advance to dispute another objective.  Only to be quickly shaken again.  In fact this whole sector is a hive of activity as we both try to claim or dispute the objective.

So the end of the game is approaching and we take stock.  We hold two objectives each, it all comes down to what happens in the centre.

Can the APC in the centre fend off my defeat?  Of course not!  Amazingly my APC is not destroyed but it is shaken and cannot dispute the objective so Gary wins by 12 VP to 8VP.  Just to rub salt in my wounds he gets all the Vampirra into hand to hand on the right with predictable results.

A great days gaming and a nail biting finish.

To see more battle reports or chat about sci-fi gaming especially Fireteam Andromeda check me out on facebook.
Posted by Mr. Harold at Tuesday, February 04, 2014