First up, the MAWP. This is a dinky little 6 wheeled remote gun platform (read tank) that could easily find a home in any Near Future, Mid-Tech or Colonial tabletop force. I could even see it accompanying the Alien Mercenaries we looked at on Saturday to make them a somewhat beefier proposition. 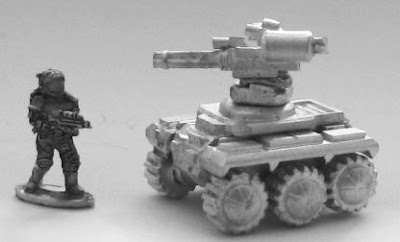 As we've come to expect from GZG, there are three variants of the wheeled MAWP (tribarrel, missiles and plasma cannon). It comes as an 11 piece kit - hull, sponsons, 6 wheels, turret and gun, which fit together really easily. Some blu-tack is holding the weapon in place for the photos, otherwise there's nothing else holding it together right now. I would recommend a dry-run before final assembly and you paint the hull sides before gluing on the wheels.

There's something vaguely Blakes 7 or even UFO about the wheeled MAWP and I like it even more for that. I can easily visualise it crashing across a lunar surface providing fire support to guys in Vacc-Suits!

Now, I bet you thought that Kitbash of the Week had dried up! As if! Below you see a quick and simple kitbash of the MAWP using the remote turret from V15-44A High Tech light Grav APC/Scout vehicle. 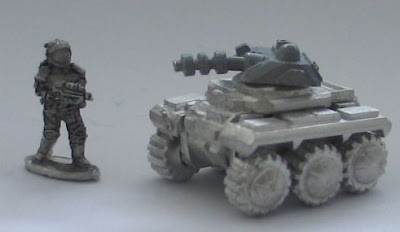 Kitbash of the Week
GZG V15-62A Wheeled MAWP with turret from V15-44A
Let's move onto V15-60A UAV Hoverdrones. These come two to a pack, which includes separate weapons pods (1 pair of tribarrel cannon and one pair of rockets) and clear plastic flight stands for £3.50. Bargain! When I bought them I didn't realise they came with the stands, so that was a bonus, providing an inexpensive alternative to GW Tau Gundrones I was considering! 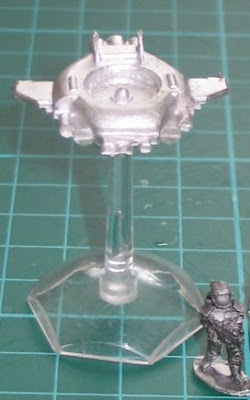 GZG: V15-60A Pair of UAV Hoverdrones
(pack of 2) ) £3.50
Once again, I really like these models. The Hoverdrones are well sculpted and are detailed on the underside as well. The hover blades in the centre of the model are very well executed. You see it here without the weapon pods attached. One of the models had quite a bit of flash, but nothing a few minutes with a knife and file won't overcome.

I'm planning on fielding up to 6 of these babes to provide cover to a light recce/screening force. Or I may even use them as a force in their own right - possibly in conjunction with GZG's unmanned AI Gunships and a range of diffrenet MAWPS. 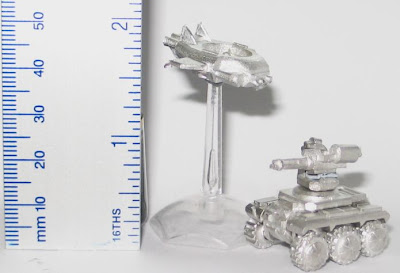 Both the UAV Hoverdrones and MAWP are really nice models that will complement 15mm, 20mm and 28mm Sci Fi forces as remote (AI) weapons platforms. It wouldn't hurt to have a couple of each these in your collection to ring the occasional change to your forces or even provide those additional points where you need them to 'balance' a points based game system.