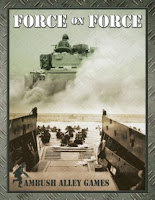 I thought Ambush Alley was THE most innovative set of warging rules since Arty Conliffe's CROSSFIRE.

I was wrong. AMBUSH ALLEY: FORCE ON FORCE has just blown me away!

Force on Force by Shawn Carpenter is a stand on it's own game that utilises the core mechanics from Ambush Alley to play engagements between regular forces rather than regulars vs. insurgents battles. Reading through Force on Force, OMG! OMG! OMG! kept repeating in my head. This could well be my personal holy grail of wargaming.

I particularly like the initiative system that has a more considered approach than Crossfire yet still manages to capture a fluid combat environment. This is not a set of mechanics that have been threaded together to bake a set of rules. Rather, Force on Force is a thoughfully designed, well oiled and balanced machine.

The focus is on platoon / reinforced platoon sized actions played on 2 foot by 2 foot or 2 foot by 3 foot tables from WW2, through Post-War, Modern and into the Near Future. No Panzer Korps here! Which make's it all so immensely 'do-able' by the average gamer. A Sci Fi supplement is being developed.

I'm going to be shaking the rules down over the coming weeks, playing several games with a Near Future or Sci Fi twist as the situation in Hyboria deteriorates into border clashes. I'll post these games on the Blog, so keep watching.

For more information on Force on Force go to Ambush Alley Games website: (Click here). I thoroughly recommend a visit if just to pinch the scenarios and mini-campaigns!