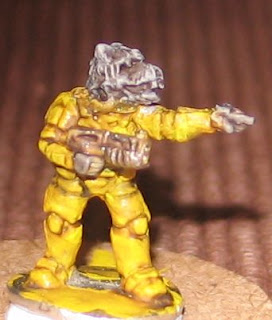 GZG 15mm New Israeli 'leader' body
with Beast Wolf Head from Peter Pig
Still very much a work in progress. Before you ask.....why yellow combat enviroment armour? Not only did I want to paint something radically different to blue! But it's believed wolves can only sense red and yellow. So, as a Vargr Merc commander, Grav'RR bought himself a distinguished yellow battlesuit. Unfortunately, like his rifle, it's seen better days, better battles.

The head is greyer in actuality than it appears in the photo - probably due to the Citadel Devlann Mud Wash. I still need to sort the Vargr's eyes to my satisfaction though.

His troopers are going to be painted in Citadel Shadow Grey (almost similar to RAF grey-blue), possibly with Black & Codex Grey tiger stripes.