Blue is the Colour! 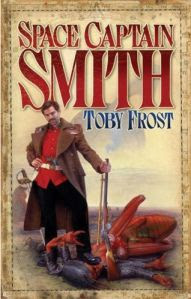 My search for an adversary worthy of my Victorian Science Fiction army is over at long last courtesy of SPACE CAPTAIN SMITH by Toby Frost.

I've only just begun this frivolous Victorian Sci Fi homage to Flashman, but loving it already and left somewhat inspired.......

......And my painting is too, following yesterday's good talking to by myself. This evening I finished 'Blue' Spartan Platoon No.1, Company Command and two scout/recce bases. OK, not a lot of figures compared to what I could potentially achieve in an evening after work, maybe, but through breaking down the task into smaller much more manageable chunks, I'm actually enjoying what I'm doing. So much so that I also completed from scratch an unplanned and very much ad hoc 'strike platoon' (blue armour, silver helmets and green visors). And oh! They do look cool!

But, it didn't stop there! Bouyed up, I also converted a couple of spare New Israeli minis into Vargr Mercs using Wolf Beast Heads from Peter Pig (Range 6, pack 42).

(pics to follow once green stuff is dry)
All in all a successful but more importantly, enjoyable evening!