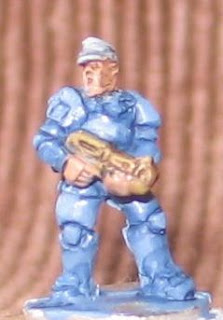 My name is Michael Caine...
The minis are brilliant (even if I say so myself) despite looking far too washed out and rather unimpressive in the pics. That 'light' blue is Citadel Shadow Grey which drys darker than you expect, then with an additional Asurman Blue Wash. The lighter 'flesh' colour is Citadel Tallarn Flesh which if you know, is actually quite dark. Nevertheless, I'm so impressed by how effective 'Steiner' looks here in front of me that I'm going to create a 15mm WWW2 Götterdämmerung unit of Waffen SS types in pea dot camo. 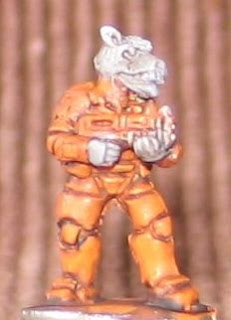 Bit ruff this morning.......
So, how difficult is it to do swop heads? The answer is, not very as long as you are not fussy. At worst, it can be time consuming and incredibly boring after your first half dozen or so. I took a pair of sharp wire stripping snips, snipped off the heads and removed the resulting ridge along the cut with a sharp knife.

Did I drill a hole to pin the head? Did I bollocks! Took the edge of the knife and gouged out a small hole approximately where the neck (spigot) would sit within a blob of glue. I use cheap knifes with those reusable blades you snap, 5 for £1 from Poundland. I snipped the neck spigot down to about 1 or 1.5mm. Steiners head was attached using UHU Superglue gel, the Vargr using an epoxy resin.

If the head is at a high angle or doesn't have much purchase, I would suggest an additional 'sock' of epoxy resin to secure the attachment for all time. If you are worried about longetivity, I have headswopped miniatures which are 7-8 years old and short of a nuclear apocalypse, nothing is going to remove their heads.

The Peter pig human heads are really small and trying to position them with your fingers is only going to end up in tears and stuck fingers - believe me I know! Instead, roll out a small amount of Blutack, stick this to the top of the head and hold the other end of the Blutack to control placement on the shoulders.

On my first headswops I carefully built up new detail using expoxy modelling putty, but you know what? This is 15mm and once the figs are painted, even holding them up to your nose, you will barely notice any roughness or small blobs of glue you missed. Unlike the camera, our eyes don't have a Macro setting.