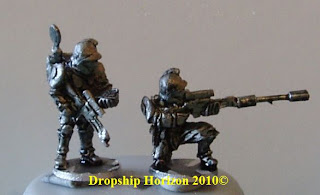 The Sniper figure above is packaged with a Plasma gunner. Nice sniper, no ghillie suitt though :-(, but I like the modular nature of the advanced-tech weapon system. I left off the P-gunner as I wanted to show this tasty signaller (?) figure who can be used as a scout, FOO, Grid-tech, squad leader. 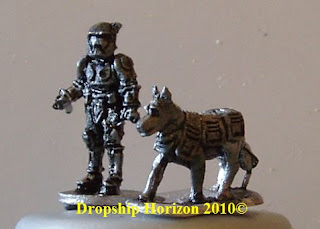 TTC-2003 K-9 Sentry Team
I may have the wrong human figure - hope I have, as he's a bit static - I would personally prefer the 'signaller' figure in the top photo to accompany the K-9. 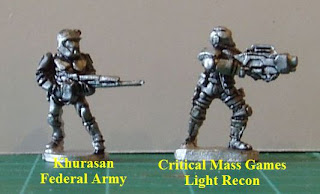 Khurasan Federal Army TTC-2001 "Female" SAW gunner
Critical Mass Games Light Recon support gunner
A comparison shot of Khurasan's Feds vs CMG's Recon as the question was raised on TMP. Notice that the Light Recon gunner stands on a slightly thicker base, but otherwise no real difference in size or bulk. The Federal SAW gunner is from pack TC-2001 "female" troopers. Not my personal interpretation of a sci fi "female" trooper but there you go. 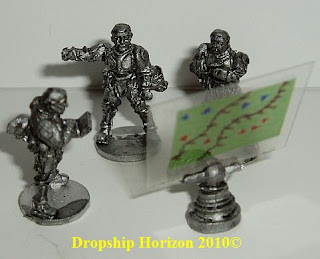 TTC-2004 Federal Army Command
(map is not cut to size)
TTC-2004 Federal Army Command pack has three standing bareheaded 'senior' officers, with helmets attached to their belts. They are studying a 'holomap' which  is very cleverly, a small map printed on clear acetate that fits into a small metal projector. Really nice touch. Two of the officers are pretty standard, third with folded arms has very soft facial features and much smaller head so I'm either going to give him a helmet or a Vargr headswop.

Overall I give Jon 11 out of 10 for effort in coming up with an extensive yet cohesive range that just begs one to build large enough tactical units to incorporate all the support and command options that are available. However, I must ask, and I've said it to more than one manufacturer, that quality of sculpting or concept does not suffer in the rush for quantity.