In The Pipe......Lunar Moonscape from Hotz Mats

.
Hotz Artworkz have announced the Moonscape Felt Game Mat. This mat is designed especially for lunar/dust-planet sci-fi gaming and are available with or without airbrushed crater artwork. 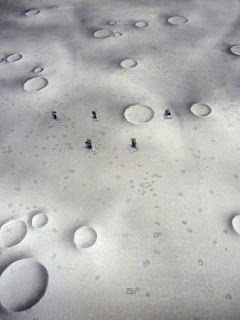 This new mat is a massive step forward for 15mm Sci Fi gamers. We can now break free from the shackles of verdant and desert planets to fight in an attractively produced low/no-grav atmosphere free environment. The Moonscape Felt Game Mat could well be the single most important Sci Fi gaming product of 2010 as it can cross genres, manufacturers and rules systems.

Time to make sure I have some suitably camo'd 15mm vehicles and miniatures to compliment this interesting and potentially challenging gaming environment. For a newcomer to 15mm Sci Fi this represents a great investment, allowing them to start playing at relatively low cost as soon as they have the figures ready.

The Moonscape Game Mat will be available from  Hotz shortly. Keep an eye on their webpage and TMP. Hotz also produce a basic Martian Red felt map and I'm wondering now about similar airbrushed crater artwork?

A quick search for other mats online caused me to revisit Terrainmat.com in the UK where I found this colourful 'Urban' terrain mat, which would definitely has potential as a sulphurous or otherwise barren and desolate planetary or post-apocalypse wasteland.

As Master Chef would say, "I think we are onto something". I'm certainly prepared to give the Moonscape Game Mat a go, and I know it would also solve Maff's space issues in one fell swoop.

Finally, for a bit of a laugh, or maybe the germ for a scenario.... WW2 Bomber Found on Moon.