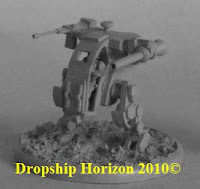 If you can imagine the military's first attempt to build a manned walker, then the "Hog" is it. Design wise it falls between a Star Wars universe AT-RT and the Aliens (1986) Power Loader.

The chassis looks soldier proof, with very little in the way of extraneous detail. The pilot/operator is a standard Federal Army grunt and once you have glued him in place you can attach the front glacis panel. You could undertake a simple headswop on the pilot/operator and the "Hog" will slip into any humanoid rebel or military force of your choosing, in a multitude of settings.

The sides of the 'cockpit' are open and the front panel has an open vision port. Use your imagination here. It could have bullet/laser proof glass or as this is Sci Fi, an electronic force screen/shield. Don;t grumble about lack of protection for the crewman, think of the "Hog" as a weapons platform rather than a mini armoured vehicle. Jon is also working on a more heavily armoured version (TTC-2009), which will have a fully enclosed cockpit.

The legs and weapons fit to the chassis using shallow ball and socket joints which allow a large amount of flexibility in posing the model. You can mix and match the different leg options to further personalise the "Hog" and ensure that a squad of them look different. Jon has also provided an option of arming your "Hog" with:
The missile launcher is a basic tube with a big cone at the back that reminds me of an L6 Wombat Recoilless Rifle and is going to be discarded. I'd prefer a multiple MILAN/HOT/AT-4 SPANDREL configuration. If I wanted a more retro look I'd go for twin SS11/Sagger or Huey style weapons wings (missiles and rotary cannon).

There will be two conversion kits following the release of the "Hog". The Mark 3, a 'Berserker Robot Walker' (TTC-2010) and a civilian/military 'Liftersuit' (TTC-2011). These are NOT complete kits and require either a TTC-2008 or TTC-2009 to make into a complete model. I'm looking forward to seeing these as they will increase the possibilities of an already versatile model. I'm sure the 'Liftersuit' will fit right into any colony, starport or starship loading bay scenario.

KHURASANMINIATURES.TRIPOD.COM
No details of price or release dates are available at time of writing.