.
As you know we are big fans of the original PREDATOR movie. Here's a Predator inspired game played back in April, earlier this year. And yes, whilst we played , the air was full of our best gutteral Arnie impersonations reliving classic lines from the movie, "Billy!"..."I wouldn't wish that on a Broke-dick dog!"......"Get to da Choppa!"..... 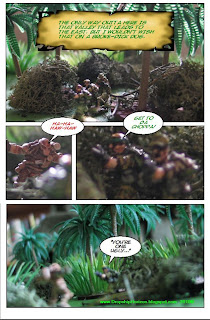 So you can imagine my delight, that Mike at The Scene is on the verge of releasing a bunch of 15mm "god damned sexual Tyrannosaurus(es)"......

SF04 to SF07
And you'll never guess the symmetry, I made an open appeal to 15mm Sci Fi manufacturers for characters like these, suitable as proxies for the movie, back on 14th November last year (link)!

So, to celebrate the release of these minis plus 30,000+ pageviews in the last 30 days, I'm going to give away two complete sets of 15mm Special Forces from The Scene during the course of this week. Stay tuned for more intel on how to win 'Dutch' and the team.