All Gone A Bit Hadley's Hope

We were in town on Saturday where I picked up a very reasonably priced copy of Aliens vs Predator for the XBOX 360.

I started the 'Marine' campaign set on Hadley's Hope and have to say, had a real blast! Dark corridors, bleeping motion trackers, Xenomorphs by the interstellar bus load and a very nice female Latino Marine called Tequila guiding my half arsed, half panicked attempts to survive. The game really got the blood pumping and inspired me to recreate the action on the tabletop!

I want to make an important point here. Computer and console games don't replace the miniatures game for me and the same is true of Master Chef. They inspire us to recapture the console action once again on the tabletop with miniatures.

My Googlefu failed to find a decent pic of Tequila on the net, to captivate budding 15mm Colonial Marine sculptors out there - but Natassia Malthe makes a gratuitous but very attractive proxy for this foxy Marine.

By way of  'research' just had to watch Aliens (1986) this afternoon, which left me all fired up for a Bug Hunt! The day job is going to be tough up till Christmas, so this will be a nice lightweight and fun diversion, switching between media and back as I like.


Unfortunately, to my mind, there are no decent Colonial Marine proxies in 15mm that appeal to me. RAFM's classic ex-Traveller Mid-Tech troopers are the nearest to my tastes but lack poses, weapon variation and character for any kind of  'heroic' movie'esque skirmish game. GZG's 15mm NAC? Yes, but they are still NAC. Denizen's 25mm Mid-Tech troopers are really tempting but I already own some of RH Model's excellent 20mm Colonial Marines! 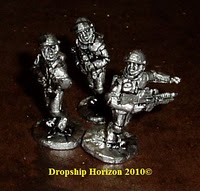 RH Models 20mm Sci Fi
Colonial Marines
"State of the bad-ass art"
I will have a go at sculpting a female head onto the slimmest of the marines and share with you my success or failure. Khurasan's Space Demons will be perfect for the 'aliens', especially the big daddy Space Demon King. And, I'll start painting the Marines this week. So there we have it, on the ready line! Lock n load and wake up Hicks - because they're gonna need everything they've got to survive the colony on a terra-formed planet that swarms with bad-ass xenomorphs.