.
Need to save some colonists daughters? Then saddle up and play it by the numbers, the  "Corvus" VTOL dropship from Scotia Grendel  is warmed up and ready to bring you into a hot LZ. 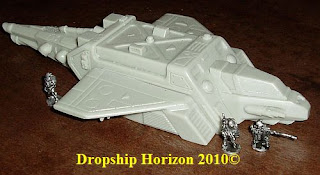 Scotia Grendel "Corvus" MkIVAssault Carrier
(minus tail fins which are still on sprue)
15mm Khurasan Federal Army figures for comparison
As you can see, the Corvus is an impressive model of a well armed dropship that can believably carry 2 pilots, 8-12 15mm ultimate badasses, a "consultant", new lieutenat and artificial person. The Corvus will work perfectly with both 15mm and 20mm figures as a fine proxy for the Aliens movie dropship. 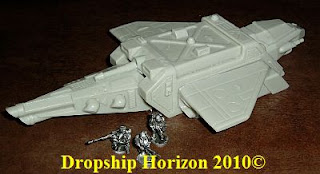 I've left off the tail fins as they are still on the sprue and this will be an even more stunning model once it's fully constructed. In addition to provding transport and much needed heavy firepower on the tabletop, the Corvus makes a great statement piece as an objective.