I've been trying to get into the new (re-imagined) series of V now showing on British TV. I loved the original1983-4 series partly because  Jane Badler (the original Diana) punched a lot of my boxes back then, as does Morena Baccarin now.

Watching Morena Baccarin with that short hair in the 'rethunked' series, I think that she would make a great Servalan from Blake's 7. Now Blakes 7, there is a TV Sci Fi series that needs to be re-imagined and put back on our screens.

Got to admit that I sided with the Terran Federation because the crew of the Liberator looked and sounded like renegades from Krull. I just couldn't take them seriously as Sci Fi heroes.

Another likely candidate for Servalan in my book would be Bridget Moynahan. She is the only reason to watch I Robot (Will Smith). Did you notice how the same 3D special effects team must have offered to "convert" (using wargame miniature sculptor parlance here) their jumping, leaping, wall scaling robots into...errr.....jumping, leaping, wall scaling and equally unbelievable post-biological apocalypse mutants in the Will Smith, Sinclair C5 of a vehicle – I Am Legend. Where was 'Chuck' Heston and every gun of the NRA when you needed them! 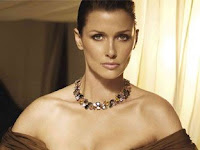 I watched the first episode plus ten minutes of the second episode of  The Event.  That's enough for me. It was ‘24’ meets ‘Lost’ without even Evangeline Lily to redeem it. I’m just left wondering where are the classic grunts on the ground Sci Fi series like Space: Above and Beyond. Don’t get me wrong, the idea of multi-million credit trained space fighter pilots running grunt missions on mudballs has me rolling on the floor – but it was at least boots on the ground grunts vs greeblies Sci Fi.

Thank Crom! for the XBox.