Four more packs of Federal Infantry arrived from Jon at Khurasan today, making a total of 12 packs since they were released.

These guys are destined to form a distinct stand-alone force. Let's call it a platoon for now, with focus for now being Tomorrow's War, and inspired by Richard's 20mm Liberation Miniature Soviet VDV airbourne assault troops - I'm thinking of of recreating this look in 15mm. Here's a quick photoshop test before I put paint to miniature.....

Photoshop colour test
Works for me as a scheme which marks them out as Elite troops or Mercs, but will it work on the miniatures themselves? Let's find out. I'll paint a test miniature tonight. 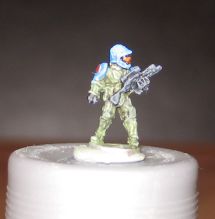