.
The following are the basic generic building blocks of my Mid/High-tech Hyborian armoured forces. These are basic structures I use to collect my models before I start adding on robotics, drones, UAVs, point defence and other support weapons.

This is a typical TOE I use for a tank heavy High-tech Mech Battlegroup within FWC. 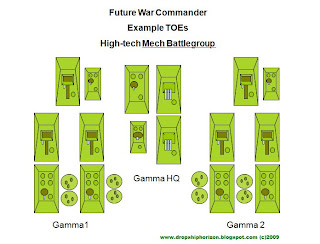 Each of the 'sabre' Gamma units has a scout car Recon/FOO whilst Gamma HQ has an armoured scout vehicle and two fire support AFV. The armour predominates with the Mech Infantry undertaking a true specialised panzergrenadier role rather than just being infantrymen carried in an armoured box. 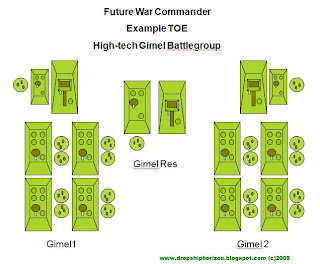 This is the Mid/High-tech Mech Infantry variant. Gimel is 'Camel' in the Phoenecian alphabet which I thought described an APC/MICV unit perfectly. Res is 'head', ergo 'HQ#. Just sounds a bit more off-world than "Company A" "Bravo Company" etc and more fitting for my 'Eastern' influenced 15mm Hyborian forces. The 'Gimel' battlegroup is doctrinely focused on the primacy of the armoured infantry with embedded armour support.

Given the cost of 15mm armour, I tend to buy one Gimel/Gamma at a time. If I want a tank force - eg GZG Grav Gunsleds (v15-08A) it's the Gamma TOE, if Mech then I go for the Gimel structure.

Why don't I have 3 Gimels/Gammas? Primarily cost! Second is space on my tabletop. Equally important lastly, I have enough robotics, Guncrabs, UAVs or even wheeled mech to have a third unit consisting of these and ring the changes tactically as I require.