.
On 17th July I reported news direct from the RAFM homepage which stated that the ex-Traveller line of tanks and miniatures was being taken out of production.

RAFM's homepage has since announced an expansion to the range of miniatures - in essence ex-Citadel Traveller Vargr, Aslan and Droyne. However the larger more expensive ex-Martian Metals' Grav tanks and AFVs formerly in the Grav Tanks section of the website have been removed from sale. 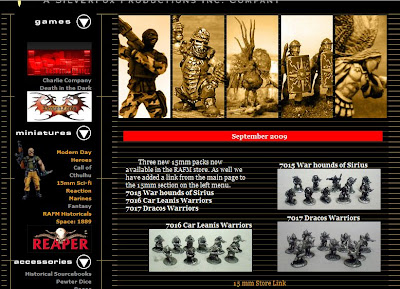 Before anyone in the UK rushes off and orders these minis - between the Post Office, HM Customs and RAFM's own not cheap overseas rates, the delivery charges come to about 50% of the order value. It's worth bearing in mind that in the UK, we have to order goods of value less than £18 or get charged 15%VAT, PLUS, an £8 GBP administration charge from the Post Office.
Cheers
Mark
.
Posted by Mark at Friday, September 25, 2009