Under the Radar..... Neo-Soviet Kombine Ramblings

Back at the end of June I wrote about the suitability of the Flames of War 15mm WW2 Soviet Sapper-Engineer Flamethrower Platoon to become Traveller/Traveller Book 4: Mercenary mid-tech Infantry with laser carbines (Click here). Well, PROJECKT KOMBINE has been progressing under the radar since then.

My vision is a planetary Götterdämmerung! Continent sized cities are the battlefields, in a dystopian "diesalpunk" future inspired by Berlin 1945 and Grozny 1999-2000.

Initially I was thinking of only using the Flamethrower platoon figures as a Mid-tech energy weapon armed force. At this point I saw them very much standing alongside RAFM's ex-Traveller/Striker Mid-Tech Infantry. Discussing the project offline initially with Master Chef and latterly with Eli, I'm now aiming towards a Lower Mid-tech urban combat force which has a mix of high velocity Gauss neo-assault carbines (PPSHs) and early technology energy weapons (Laser/Plasma or similar). 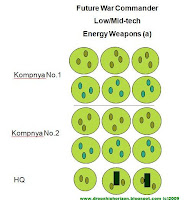 Neo-Soviet Kombine
Urban Assault Batnova
To reflect the newness of this 'emerging' technology on TOE, one Plashnya per Kompnya will be armed with energy weapons. One box of SU803 Sapper-Engineers and 2 boxes of SU804 Sapper-Engineer Flamethrowers will give me a Batnova of 3 Kompnyas or preferably two understrength Batnovas. 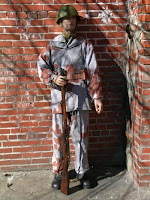 The project received a boost when I discovered this superb Soviet era urban 'ameoba ' camouflage suit, which just felt like it had the correct Sci Fi and Neo-Soviet look and combined with helmet visors added from greenstuff would move the figures away from their more obvious WW2 origins.

At the moment I'm looking at using traditional FOW style bases for these miniatures and to make my life easier, the 4 man urban bases from The Scene are certainly worth considering.

Here's a rough impression I created as part of my 'mood board' to help me visualise the overall look of the Neo-Soviet Kombine urban combat force - naturally they will look better on urban terrain bases and to excentuate the urban devastation I've purchased a tub of GF9 Ash Waste Flock to try out. 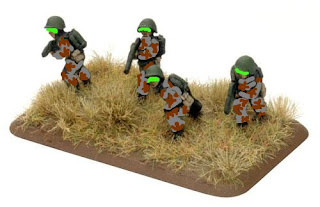 I'm in no rush. This is a labour of love and I'll probably not get round to painting and basing until I have time off work at the end of October/beginning November. But, it's something fun to pull out and crack on with when I need a break from my mainstream Sci Fi projects.