Zombies, Girls with Guns, World War One, Oh My!

.
Is think I prefer this version of the Battle of the Somme. Seriously, well, semi-seriously, will Sucker Punch make World War One bigger than Weird/1946 Nazi fodder? 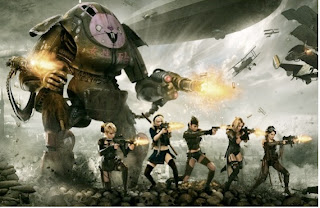 The right walkers and similar 'mechanicals' could make the trench battles of WW1 much more interesting. Don't get me wrong, I studied trench warfare tactics and have played great trench games in the past. I have 2 regiments  of 15mm Peter Pig Late War Hun, plus a Sturmbattalione of Strosstruppen and Brits to boot.

But now thinking with my Sci Fi battle bowler on, certainly an excuse to brush off my 15mm Tommies and those new ArtCrime Productions Valkyrie Battlesuits may just be the trick for WW1 mechanical combat assault troops.

Mmm...maybe some mileage in this. Absolutely barking, but mileage nevertheless.