Certainly not a find on Ebay, but thought I'd take this opportunity to mention the new Comms Tower Objective from Critical Mass Games. I picked one up at the beginning of December along with the Arc Fleet Recon and Drop Trooper Heavy Weapons packs. 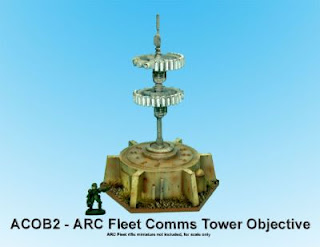 It stands out as a really different piece of grungy human or mid tech alien technology. Craig's done a fantastic job weathering it. Mine is going to see additional use in my fictional AK47 Republic setting as Radio Lumbago and as the microwave tower for President for Life Zwolleo's premium chat line enterprise. 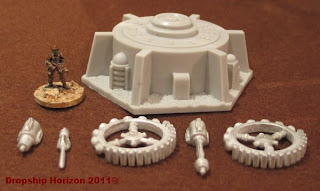 The Comms Tower is on the workbench to be assembled and painted this week. This is what it looks like straight out of the bag. The base is 75mm at it's widest and the communication spurs are between 25-30mm in diameter. Two or three of these towers would make a very nice centrepiece on the table and raison d'etre for a game - defended by some bunkers and point defence weapons and you have the makings of a great drop commando raid!