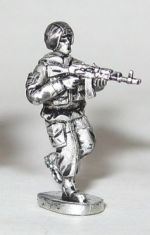 I mention towards the end of last year that my intention was to give up 15mm Moderns. I have. The death knell was sounded last week by the release of Under Fire Miniatures' new 20mm modern Russians including a pack of MVD/OMON Special forces in 'mushroom' helmets.

I just got tired of being presented with some Sovietesque motor rifle era figures armed with an AK47 cut-out as 'modern' - after all would you call the Bay City Rollers modern? To me, might as well be Russian Civil War or even Crimean War minis for their relevance.

Add to that, 15mm figures still being produced in  'line dancing', 'just eaten a dodgy kebab' and 'brushing a cobweb off the ceiling' poses. Please.......

Starting in a new scale has meant having to start from scratch with new terrain, new figures - six months worth of wargame budget that could have been spent on 15mm Moderns, Sci Fi etc.

This is just my opinion. My taste. Nothing more. I know there's plenty of folk out there with cash to spend, who are happy to receive a pack of lead as long as the pack title says RUS1 Russian, AK47. Each to their own. I'm going for the figures like the one above, great posing, representing troops NOW, easily migrateable into Near Future or even low tech Sci Fi settings without looking anachronistic.