I'm revamping Mudd Eisley. There's a distinct lack of domes and I mean to fix that. So I've been collecting interesting packaging - helps working next to the IT department - to replace my current stock of buildings before I put them in for a Sarah Beeney. 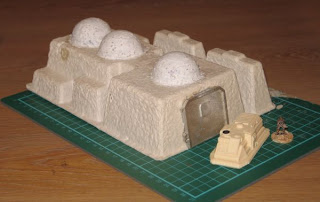 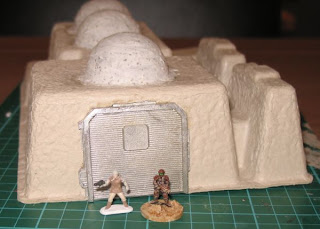 L: Star Wars Action Fleet 'Echo Base Trooper'
(makes a decent desert trooper too)
R: CMG Light Recon, Mudd Eisley style
The 'domes'  are mini plastic footballs used for Easter egg hunts (apparently)  - pack of 6 which could be split into 12 halves was £1 from Poundland in Aberdeen. Since seen similar in Hobbycraft.

The underneath of the 'roof' is reinforced by a sheet of card glued into place. I then ran big globs of PVA glue around the inside lip of the dome halves, before repeating on the outside. Once the dome was laid on the roof, I ran the glue for about a centimeter around the base of the dome to ensure that it had a good footprint. It was only at this point I remembered that I had a hotglue gun - DOH!

Once dry - well, once the PVA had turned transparent at least, I mixed sand, PVA and 'quick dry' exterior Polyfilla (1 PVA : 3 Polyfilla) and brushed, yes brushed on with an old Size 2 brush. Took minutes. 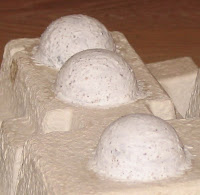 Dome Closeup
The garage door is from GZG's Building Fittings. Mike at TheScene has similar, equally good, but I already had the GZG door spare. It would be easy to go mad with windows and door on these scratchbuilt models - but you have to bear in mind this is Mudd Eisley - fierce heat and even fiercer sandstorms.

What does make a difference though is 'industrialising' the building - just one or two accessories such as vents, exhausts, aircon units or pipes. And here can I say that I wish someone would produce 90 degree pipes in a couple of sizes, in pairs and triples, that can be rested against a building.

The 'taxi' is a really nice GEV APC from Scotty at Combat Wombat. It seemed just right to fulfill the role of a rugged desert taxi-bus in addition to it's intended purpose.

Still very much a work in progress but I'll keep you updated.