Long term passengers aboard the Dropship will know that I like mixing troop types within multiple figure bases to represent embedded AI, support weapons or similar in future combat formations.

Earlier in the week, I pulled out Spartan Blue Team - two platoons of GZG's classic New Israelis, with a view to sell on Ebay. But you know, once out of the box and on the table I thought these guys are great. Why would I want to sell them?

So I hoovered up some odds and sods lying around, Maff (Master Chef) kindly gave me a spare pack, and set about painting them up and basing them tonight to reinforce Blue Team.

As I started putting the figures on the bases I though - hang on! And grabbed one of Khurasan's new Ti Mohnid miniatures. The result.......... 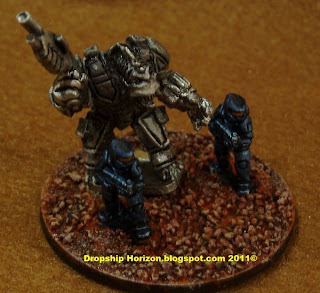 Master Chef shrugged and said "Well, why do they have to be bad asses? Why can't they be OUR bad asses! Born and bred for their combat power and loyal devotion to man. Cheaper than a mech!"

To which I replied, "Aye, but they make frikken awesome Brutes, Dont they!"

We both agreed "Bad Asses!"