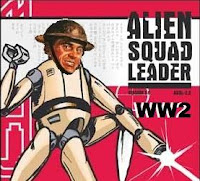 After a welcome lie-in this morning I hoped to spend the day either 'pushing lead' or a paintbrush, No such luck. Rear brake drum on the Landie was solid. Had to jack her up, take the wheel off, do a good impression of a wheel tapper and shunter, then slap it all back together. Success and massivebut short-lived brownie points with the Dropship Bunny.

Just cleared the grease off my hands when Maff called. His Critical Mass Games 'Blockheads' arrived earlier in the week and we had discussed their potential to become Weird World War Two German power troops or robotic infantry invented by Nazi science. This led on naturally to using Alien Squad Leader v0.2 (ASqL2) for WWW2 and, hey, eureka moment - why not WW2!

We both have middling to large Flames of War armies that are just taking up shelf space - ASqL2 allows us to do WW2 gaming in a controllable and fun way but most importantly, get those models back on the table. As we'd already decided that desert and jungle terrain were going to be our focus this year - let's start then with the Desert Rats vs Mr Rommel's DAK!

Now before you start going "Shock, horrror, where's the armour penetration charts?" If you think with a broad brush and have a slick, fun game as your objective, the vehicle categories within ASql2 should work as is and we're never afraid to tweak if necessary.

We've also been chatting over the past month about downsizing our respective AK47 Republic armies as well. This is in line with our recent "pizza base" gaming concept - so again, why not keep the Political Charts but otherwise use ASqL2?  Maff (MasterChef) is the king of minimalist wargamin, and you can tell I've been on a streamlining and efficiencies kick at work this week can't you....... with my final Lean Six Sigma Ninja exam coming this Wednesday.

Korea. ASqL2 also for Korea! I can't justify doing the Korean War in a big way just now - but it made it to my "bucket list" last year, and Jon's Chinese Peoples "Volunteer" miniatures make this delightfully possible in 15mm. The collateral benefit is a  Pentomic era US Army for fighting alien grey or Martian tripod invasions. The Khurasan Chinese 'burp' gunners might also make decent Sci Fi workers militia or rebels on one of the background planets in Tomorrows War.

I'm not saying that we are having a clean sweep across the board and giving up other rulesets altogether. I still love playing Crossfire, IABSM, Force of Force. The fact is, we enjoy ASqL2. It's fun, unpretentious and provides a focus for mid-week, pick up and play, beer and pretzel gaming.