Despair and frustration will not shake our belief
that the resistance is the only way of liberation.
For humanity to make a stand against alien invaders, Zombie plagues or genocidal machines, there must be men and women in 15mm ready to stand and fight...... 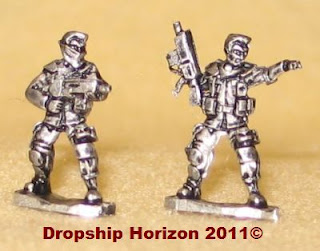 Is that John Connor? We're Saved!

Rebel Minis: RMGT3
Government Types
Now, I didn't make use of Mike's superb special offer this Christmas, I guess there was just too much to choose from and my brain was fried. But if I had, and definitely included in my next order, would have been the latest pack, RGMT3; 'Government Types'.  There's just something about them in the photo above from the Rebel Minis website, where they look like an ad hoc group of nervous and unsure survivors in the immediate aftermath of an apocalypse. with a couple of guys who are more sure of themselves and tooled up from the local gunshop. The dark blue, grey, black colours.? Look at any group of people getting off a train in the morning and you will see most are in dark, sombre colours from autumn on through mid-Spring. At least in this part of the world, Of course I'll paint one or two in ex-army jackets or outdoor cagoules etc to ring the changes.