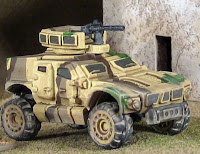 Two of Rebel Minis' new 15mm Commanche MATVs turned up in the post today. So what are my first thoughts, straight out of the packet?

The kit comes as a crisp and well detailed semi hollow resin body (55mm x 30mm approx) that sits on a substantial metal chasis. Very impressed by the latter. The body is largely clean of mould seams, so another big bonus. Even before I put on the big metal wheels that in themselves add character to the model, the Commanche is lready a tasty looking vehicle.

Now let's talk firepower. The kit is accompanied by a robust metal sprue which holds the following weapon options for your Commanche:
These weapons can be mounted directly into a hole on top of the hull OR into the one-piece metal turret which fits neatly over the existing hatch. Finally theres an optional metal gunshield.

OK, I'm impressed. Very Impressed. All too often you buy a 15mm armoured vehicle only to find that the parts, even including the wheels are thin and spindly and ensure the vehicle looks like it would come off worse in a collision with a Renault 2CV.

Especially so the weapons. On the Commanche they are well sculpted and robustly cast. Well in keeping with the vehicle. I absolutely abhor models that turn up with weapons that have barrels thinner than Posh Spice. I'd love to obtain this weapon sprue separately to replace the weapons on some of my other 15mm models.

Any negative comments? Well, the rotary Gatling isn't as good as the one with the Rebel Minis Gila ATV Buggy. Plus, I would have liked a plasma cannon or similar added to the weapons options for a more Sci Fi look. Maybe in place of the 7.62 MAG. But those are really my only niggles.

Well done JBR! And if not on already on the cards, I'd like to see a six wheeler weapons platform version of the Commanche and yes, even a halftrack!

The new Commanche from Rebel Minis projects toughness. I love it. Whether you are going to be evadng Zombi hordes, on a Thunder Run in New Baghdad, or planning adventures in the Forbidden Zone for a small group of 15mm characters, this IS the taxi that'll take you "south of the river" and more importantly, bring you back again.