.
I ordered a platoon worth of Wartime Miniatures' new 20mm ultra-modern Russians this morning. I was going for two platoons but thought, no, still three weeks of the month to go. 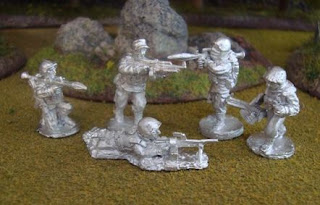 Wartime Miniatures: MR04
20mm Russian Suppoort Weapons pack
I like the natural 'in the combat zone' poses, the mix of headdress, such as 'Ranger' caps and bandanas, which were very evident in Russian/CIS forces during recent conflicts. It also makes some of the figures suitable to be mixed in with post apocalypse survivors or financial meltdown American Militias to break up the hackneyed 'not another M16' look.

These particular miniatures also appealed to me because they had a passing resemblence to the mercenary illustration in the classic Traveller Book 4: Mercenary. So may well end up proxying for 20mm Mid-Tech mercenaries as well.

Update: Consequently, I've been making some suitable buildings today based on those appearing in  Call of Duty: Modern Warfare. I'm using textured building material sheets from Wills Kits. The textured dressed stone is very good but I feel my old technique for using thin cardboard to create wood planking is superior as there's more definition, even if a bit rougher in appearance than the moulded plastic .
,
Posted by Mark at Saturday, March 05, 2011